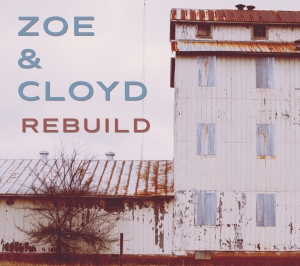 Though Rebuild, the new collection from Organic Records’ Zoe & Cloyd — Natalya Zoe Weinstein and John Cloyd Miller — is full of songs that relate to the unprecedented upheaval of a world-wide pandemic, the duo and their ace band (Bennett Sullivan, banjo and guitar; Kevin Kehrberg, upright bass) actually began recording for the project weeks before COVID-19 became front page news. Yet even in that first session, some of the themes taken up by these songs would make their appearances — perhaps because the ultimate challenges of the pandemic aren’t so much new ones as they are intensified versions of those long faced by hard-working people the world over. Like its predecessor, 2019’s I Am Your Neighbor, Rebuild is a clear-eyed yet heartfelt — and occasionally humorous — slice of folk music at its best, weaving personal experiences and social concerns into a tapestry that reflects the human condition.

“The pandemic has touched everyone in some way and Rebuild emerged during this time period,” says Miller, who wrote or co-wrote most of the songs. “It is a theme that runs through the whole album, whether it's the idea of rebuilding ourselves, our relationships and our societies, or something more subtle such as connections to place and our acceptance of change. Even the instrumentals evoke the idea of transformation out of the old and the inevitable rebuilding of a new reality."

Blending authentically-derived bluegrass, old-time country, klezmer and folk sounds, Zoe & Cloyd have developed a powerful distinctive approach to arrangement that gives each of Rebuild’s songs — whether previously- or newly-released — just the right treatment, from the thoroughly contemporary bluegrass drive of the project’s first single, “Where Do You Stand,” to the gentle lilt of “Paper Crowns,” the traditional bluegrass beat of gospel radio favorite “That Home Far Away,” the Old World flavor of “Hoffman’s Hora/David’s Frailach” — the latter a tune discovered among the papers of Weinstein’s klezmer musician grandfather — and the wistful, memory-driven ballad, “Chestnut Mountain,” which recalls the farm owned by Miller’s bluegrass musician grandfather, the legendary Jim Shumate.

New highlights include another throwback to traditional bluegrass sounds in the humorously self-deprecating original, “Everything But Me,” a recently-composed instrumental (“Pan America”) that offers both waltz-time and up-tempo variations on a haunting melody, a grassy meditation on the power of collective spirit to transcend hardship (“Carry This Together”) and a beautifully restrained a capella version of a Jean Ritchie classic, “Now Is The Cool Of The Day” to close out the project.

With each song, whether heard for the first time or recollected as an already-discovered favorite, Zoe & Cloyd demonstrate an unsurpassed ability to create roots music that speaks to our time.

About Zoe & Cloyd
Zoe & Cloyd spring from deep roots in American music. Founding members of the acclaimed Americana trio, Red June, and long-time veterans of the Asheville, NC music scene, Natalya Zoe Weinstein and John Cloyd Miller released their second full-length album, Eyes Brand New, in spring of 2017 and their third, I Am Your Neighbor in 2019. Highlighting their emotive songwriting and signature harmonies, this album showcased the breadth of their collective musical spirit, seamlessly combining original folk, country, old-time and bluegrass with sincerity and zeal. Zoe & Cloyd’s debut recording, Equinox (2015), was met with high acclaim and the pair has continued to gain momentum with a 1st place win at the prestigious FreshGrass Festival Duo Contest along with performances at MerleFest, Music City Roots and more. In 2020, Zoe & Cloyd were the first artists featured in Will & Deni Films' Pandemic Arts Series, and they will appear in Season 5 of the nationally syndicated PBS show, David Holt's State of Music in 2021.