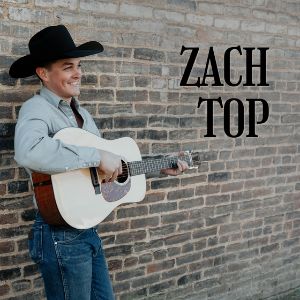 Click here to go to the RBR Entertainment Main Page


Zach Top - Self Titled EP
This album was a long time coming and I'm excited to have it out! We'd been together as a band for a few years and had gotten great responses from the live shows we'd played and videos we'd released.

Leading up to cutting the album, we had a bunch of great material that we thought ought to be recorded and knew it was time. We put the record together half filled with stuff we love to play live - stuff we knew people love to listen to as well.

The other half is original music, with some of my own songs are on there (both of which I am very proud of), including "Forget You" written by myself, and "Three Sheets to the Wind" which I wrote with Will McSeveney and Carson Chamberlain, as well as songs from other great writers.

At the time, Carson had also sent over a handful of other great songs - 3 of which we picked and ended up being the first 3 singles off the record: "In a World Gone Wrong," "I Don't Mind," and "Like It Ain't No Thing".

Each song felt fresh and exciting, and offered something new that hadn't quite been done in the bluegrass world. I was excited about the success that each of those singles had on radio & am thrilled to have the rest of the project out for people to enjoy.


Zach Top Biography
Zach Top was born and raised on a farm in eastern Washington, growing up with dreams of being the next George Strait. He has been singing since he could talk and started playing the guitar before he turned five.

By the time Zach turned seven, he and his three siblings formed a family bluegrass band called Topstring. For the next ten years, the group played a regular circuit of festivals and grange halls around the pacific northwest, opening for acts like Cedar Hill, James King, and Balsam Range.

Zach joined the Seattle-based band "North Country" in 2015, and toured steadily with them for 4 years. In 2017, he played a major part in writing and creating the bands second record, "Lonely Tonight."

Zach furthered his musical career when he joined the band Modern Tradition, winning the SPBGMA International Band Competition in 2017. Modern Tradition also made appearances on various stages at IBMA. This momentum led Zach to an endorsement deal with Preston Thompson guitars, and he is the proud and grateful owner of a Thompson D-MA.

In the fall of 2020, Zach signed with RBR Entertainment and released his first single, "In a World Gone Wrong," reaching number 4 on the Bluegrass Today charts. Zach currently makes his home in Nashville, Tennessee working as an artist/songwriter.
38
What's This
Advertisement