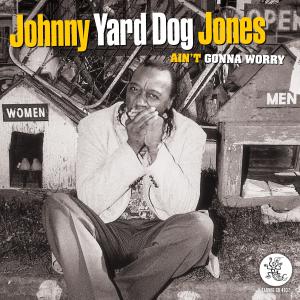 Born in Crawfordsville, Arkansas on a cotton plantation, Johnny was the third eldest of ten kids. But, when he was four, the family move to East St. Louis, Illinois. There, Johnny “Yard Dog” Jones learned to hunt, fish and care for the family’s farm animals and gardens.

Jones’ early influences were not entirely blues-specific artists. In fact, in his early life, Jones was greatly influenced by gospel music in the church. Jones’ mother was a devout Christian who encouraged her children to be active in the church. As a result, Jones and a few of his sisters sang in church services during their childhood.

Later, Jones’ father introduced him to blues music. When he would visit the homes of his father’s friends, while the men played checkers Jones was responsible for changing the records on the phonograph. It was then that Johnny “Yard Dog” Jones remembered hearing the music of influential blues musicians, such as:
Robert Johnson
T-Bone Walker
Sonny Boy Williamson

While Jones appreciated blues music, he was definitely more inspired by some of the early gospel vocalists he was exposed to, including:
O.V. Wright
The Spirit of Memphis
Archie Brownlee
James Phelps

By ten years old, Jones had purchased his first harmonica with money earned through his portable shoe shine business. His music capabilities continued to evolve when an uncle lent him a guitar to practice with.

In a matter of a few years, Jones was playing all over East St. Louis, essentially wherever anyone would listen. As Jones started hanging around blues clubs more and more in his early teens, he befriended Albert King, a prominent blues fixture at this time in East St. Louis. Around this time he also met “Little Walter” Jacobs, who encouraged him as a harmonica player.

At 18, Johnny “Yard Dog” Jones moved to Chicago with other family members where he joined a relative’s gospel group called “The Little Flowers.” Later, Jones spent many years as a guitarist in numerous gospel groups throughout Chicago, including another family group named “The Gospel Comforters.”

After a failed marriage, Jones moved to Detroit in 1971. While he was still involved in gospel guitar at this time, after seeing the decline of Detroit’s blues culture, Jones was convinced to experiment with his talents as a blue artist.

Jones first joined the Bo Bo Jenkins Band playing guitar. But, a few years later he was convinced to sing. Following audience praise at these early singing gigs, Jones refocused his efforts on becoming a blues singer. Not long after, he revisited the harmonica too.

Eventually, Jones helped to revive the blues culture of Detroit by working with other prominent blues musicians to form the Detroit Blues Club. This group helped secure venues for blues artists and later evolved in the Detroit Blues Society which is dedicated to “Keeping the Blues Alive.”
Johnny “Yard Dog” Jones Mid to Late Career

While he was known as Johnny Jones for most of his career, he did not adopt the “Yard Dog” moniker until later in his career when he became frustrated that he wasn’t getting enough exposure. Although adding “Yard Dog” to his name certainly did not enhance his skills as a blues artist, soon after new opportunities beckoned.

For his debut and sole, full album, Ain’t Gonna Worry (1996, Earwig Music Company), Johnny “Yard Dog” Jones penned original lyrics for most of the songs. He also sung, played harmonica as well as some guitar on several songs. The album also featured an outstanding lineup of established Chicago blues musicians supporting Jones, including:
Detroit Junior on piano
Johnny B. Moore on guitar
Bernard Reed on bass
Kenny Smith on drums

Johnny “Yard Dog” Jones was a dominating force on the Detroit blues scene, nationally and internationally as a vocalist and harmonica stylist. He was a true entertainer, mesmerizing audiences with his voice, lyrics, music, smile and a few dance steps.

Despite winning a W.C. Handy Award and Living Blues Critics Poll for his debut album, Johnny Jones Jr. retired from gigging around in 1998, citing the realities of the music business and having to compete with younger musicians of lesser talent.

He moved to Decatur, Illinois and continued to write and play guitar and harmonica at home. Some of his last public performances included the Pocono Blues Festival with Aron Burton in 2008, the Chicago Blues Festival in 2009 and a few gigs with the Kilbourn Alley Blues Band.

He made his final recordings for Earwig Music in 2007, playing harmonica on 2 tracks on the final album of Honeyboy Edwards' career, and singing and playing harmonica on 4 tracks which remain unreleased, backed by guitarist Chris James, bassist Patrick Rynn and drummer Kenny Smith.

Johnny “Yard Dog” Jones died suddenly of a heart attack September 16, 2015. He was one of the most talented musicians ever to record for Earwig Music Company.