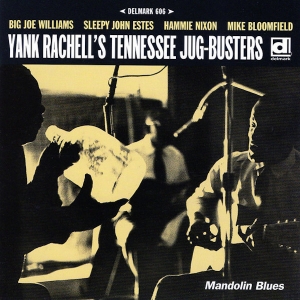 Songs 1-9 recorded at Mike Bloomfield's residence by Bob Koester and Pete Welding. Songs 10-16 recorded by Don Queen at his residence.

Yank Rachell was the master of mandolin blues and this was the first blues LP to feature this instrument. Of course the mandolin had been recorded before that; Yank himself recorded for Victor in 1929 & ’30. Later he accompanied Memphis Minnie and Walter Davis in the studio. He met Sonny Boy Williamson (the first one) and the two became good friends, recording together for several years. The folk-blues revival of the early ’60s saw older bluesmen being re-discovered. Delmark found and recorded Estes, Speckled Red, Big Joe, Arthur Crudup & Yank, which was the beginning of blues recording at the label. Six previously unissued performances have been added bringing this album up to 63 minutes.