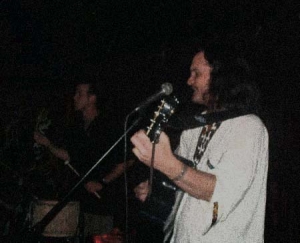 YACHAY is a sonic two piece vehicle born from the love of the Mother Planet.... When Jeff and William met up in the jungles of Peru, they had given up playing music...at least, playing music with popular touring bands. Instead, they immersed themselves in shamanic experiences in the rain forest that ultimately would lead them right back to what they'd left behind. In short, they were bombarded on every sensory level with the vital importance that the vibratory rate of sound plays in the creation of reality...not simply in human terms...but for all life on Planet Earth. When they eventually returned to the United States, they decided to see what would happen if they applied their sonic-shamanic experiences to a musical vehicle...and YACHAY was born. What they quickly discovered as they started to play out was that people everywhere are still hungry for what's real..in their ears, in their hearts, in their lives.

Natural and live, primal and intricate, acoustic and dynamic, relentless and sweet, the music of YACHAY is played by 'just' two men with a diverse range of visceral instrumentation. What you hear in the fullness of their recordings, you will experience in their live performances. Real time music, 100 percent, song after song. Most of their fans hesitate to even describe them as an 'acoustic' act. In fact, most of their fans hesitate to even describe them at all, anymore. Call them alternative to alternative. Call them whatever you want. They won't mind. They sing in English. They sing in Spanish. They chant in Quechua. They groan. They whistle. They sweat. Call them real.

YACHAY sing for the transformation the Mother Planet is undergoing, in all of her creation and destruction, and the beauty of being alive during such a time of amazing opportunity for liberation. The music speaks to something that people are already feeling internally about a widespread process that is underway on this exquisite planet. Listeners sometimes cry openly at their shows for how the sound resonates through them. YACHAY are committed to making the music accessible to people everywhere...across both cultural borders and musical markets. To this end, they have played with hard rock, jam, ethnic, reggae, world beat, alternative rock, blues, acoustic, gypsy, and grunge country groups, amongst others. They have played a spectrum of different style venues, festivals, and events. They have been interviewed and played live on popular widspread radio and internet shows. They have played in South and North America. They've played concerts for the dolphins and the insects. They are just as much at home playing for the children in a 'remote' village in the jungles of Peru as they are for large amounts of people in a 'modern' rock venue. The result is the same. The music moves people, and people move to it. The music is in and of itself the message, and it rips from the place of primal, planetary groove.

With the release of their album SWEET MOTHER MERCY in 2005, YACHAY are poised for major media attention - from radio and television, to printed press, to the internet, to their intense love of touring and interacting live with live people. The album is set for a mid-summer promotion to 400 radio stations US nationwide, with a comprehensive YACHAY tour to follow. While SWEET MOTHER MERCY in no way attempts to define their 80 plus song catalog, it conveys all the urgency, passion, and musical ferocity that people have come to expect from two men with an acoustic guitar and basic percussion. Featuring eleven songs tightly interwoven in English and Spanish, their first full length studio album makes good on YACHAY's vision to have the music accessible to people in a widespread way across musical categories and political boundaries. SWEET MOTHER MERCY invites people everywhere to hear the song of the Mother Planet in their own hearts, to stand in the release of sonic thunder and...let it come.