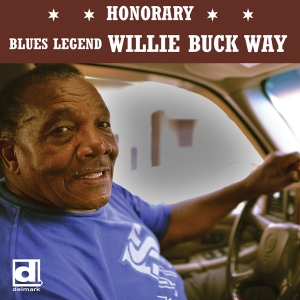 "And what a voice Buck has. Despite being born in 1937 and leading his own bands in Chicago for over 50 years, his vocals remain in top condition with his innate inability to get inside the lyrics of each song. Buck’s vocal mannerisms and music owe a tangible debt to Muddy Waters, but at no point does he come across as mannered or contrived. Rather, he has absorbed Muddy’s influences so completely that they are merely a part of the whole that is Willie Buck"- Rhys Williams, BLUES BLAST

Willie Buck’s previous Delmark album, Cell Phone Man (released October, 2012), debuted on Living Blues Radio Chart in the #1 position in the December issue along with an 8-page feature story and a glowing album review. “His vocals are sinewy and expressive (he demonstrates a powerful upper range that even a lot of his longtime fans will find surprising)...postwar Chicago blues have long been, and remain, a contemporary music to him, and he delivers them with both urgency and élan.” – David Whiteis

Willie Buck was born in 1937 in Houston, Mississippi, near Tupelo as one of eight children. He’s been on the scene since his arrival in Chicago as a teenager in the midst of the heyday of Chicago blues in 1953. His first exposure to live blues in the big city came when an older relative snuck him in to see Muddy Waters at the very peak of his powers and fame. The sound of Muddy’s classic band had such an impact on Willie that he quickly absorbed it as his own, and even in the face of all the changes and developments in music over the next half century, he’s held onto to it with unwavering devotion ever since.

Ask anyone who has spent any time in the trenches of the Chicago blues scene about Willie Buck, and you’ll hear the same things: he’s one of the last of the old-school blues singers, one of the few guys who has a real handle on the classic Chicago blues from the ‘50s, a hard worker who over the years carved out a niche for himself in the south and west side blues joints. Buck has been leading his own bands in Chicago for 50 years.

His self-produced debut album came out in 1982, later re-released on Delmark as The Life I Love (Delmark 805) with John Primer, Louis Myers, Dave Myers and Little Mac Simmons. (He also received a bit of mainstream attention when he was featured briefly in the Academy Award nominated 1994 documentary film “Hoop Dreams” - he’s the father of one of the main characters.)

This new album, Willie Buck Way, features 12 new Buck originals with fresh covers of Muddy Waters, Leroy Carr and others. Willie Buck Way is the name of an honorary street named after Willie in his hometown, Chicago. Notes and original artwork by Plastic Crimewave (Steve Krakow) featured in the CD pamphlet