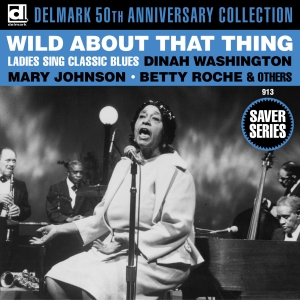 Women blues singers have been recording since the 1920s. Wild About That Thing features the best of both classic and modern blues.

The past half-century of jazz and blues, from the Chicago perspective of Delmark Records, is more fun, stranger, grittier and more intimate than the music typically purveyed by major companies. The Delmark guarantee is genuine jazz and blues, played without compromise. And after 50 years, we've still got it!

You'd be surprised at the interest jazz fans had in blues as early as the ’30s, long before the surge that began in the ’60s. This writer discovered Louis Armstrong accompaniments with blues ladies such as Ma Rainey, Bessie Smith, Sippie Wallace and Chippie Hill. Boogie Woogie piano and mysterious artists like Memphis Minnie, Tampa Red, Speckled Red and Cripple Clarence Lofton further drew me in.
The Chicago female blues scene came alive in the ’70s partly due to various productions of the play "Little Empress" which mined local talent for Ma Rainey and Bessie Smith roles for at least six productions in the ’70s and ’80s. Pianist Erwin Helfer deserves credit for his efforts to showcase women in the blues as do the club owners who recognized these talents, especially Blue Chicago.
Edith Wilson followed Mamie Smith and Lucille Hegamin, becoming the third blues artist to make records in 1921. "He May Be Your Man" with Little Brother Montgomery's band repeats her early hit. There's more of LBM's band on Goodbye Mr. Blues (Delmark 663).
Mary Johnson started recording nearly a decade later. By the time of her rediscovery she had joined the church. So here she is with the Dixie Stompers in the previosuly unissued Show Me The Way, which will appear in a Dixie Stompers retrospective.
Blue Lu Barker came along in the late ’30s and is best remembered for "Don't You Feel My Leg" more recently covered by Maria Muldaur, the Cheathams and Big Bad Voodoo Daddy.
Dinah Washington, the queen of the blues, picked up the crown from Lil Green in the mid-’40s. On this Apollo date she's accompanied by jazz greats but Mellow Mama is stone blues!
Betty Roche is remembered for her appearances with Duke Ellington, but when Leonard Feather brought Earl Hines into a session with Johnny Hodges and Ray Nance, Betty got down on several fine blues. "I Love My Lovin' Lover" features Al Casey's guitar.
Big Time Sarah is too intimidating for us not to include her! Lay It On ’Em Girls (Delmark 659), and A Million Of You (Delmark 750) with Rico McFarland complete her Delmark discography -- thus far.
Katherine Davis has been heard with Malachi Thompson and is a fixture on the blues circuit, but here she is with Roy Rubinstein's very New Orleansy Chicago Hot 6.
We first met Karen Carroll when she appeared on Professor Eddie Lusk's Professor Strut (Delmark 650). "Confessin' The Blues" is from the Dixie Stompers second reunion album, Stock Yards Strut. Karen has two of her own Delmark CDs; Had My Fun (Delmark 680) with Johnny B.Moore and Talk To The Hand (Delmark 707).
Bonnie Lee led the current wave of blues ladies when she recorded the last blues session produced by Mayo Williams (who did Ma Rainey's Paramounts), then was tutored by Sunnyland Slim.
Grana Louise dropped by our Riverside Studio as we were recording the Bay City Jazz Band's Alligator Crawl and sang "You've Been A Good Ole Wagon" mixing Bessie's tune with Dinah's style. Grana can be heard weekly at Blue Chicago.
"Not For The Love of You" is from Shirley Johnson's first domestic album, Killer Diller. Like so many other blues ladies today, she began singing in the church. Born in Norfolk, VA, Shirley made a brief foray into soul before settling into the blues in Chicago.
Zora Young's "Brain Damage" is a reminder of the need for humor in the blues. Zora has played the Chicago Blues Festival many times and regularly tours Europe.
So our CD presents a thumbnail hisory of female blues -- and, we hope, something more than a hint of the intimate connection between blues and jazz.
- Bob Koester, September, 2003