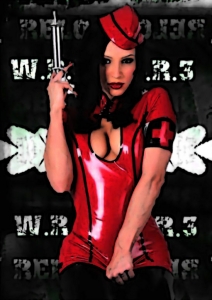 BIografie W.R.3 :
War Risk 3 is an alternative, agressive punkrockband from Denderleeuw, Belgium. The music is influenced by punk and rock, it can be described as hard but always melodic. The bands' name refers to the risk of a 3rd world war, which is also reflected in our lyrics. We have lots of fun on stage and like to involve the audience in our show, that's why our gigs usualy end with a big party.

The band released a new CD in 2007, 'Reloaded', a follow up to the 'Thank you Mr President' CD from 2005. The recordings were made in 'De Studio' in Asse, Belgium, a point of reference for many alternative bands. The CD single 'Looking for a home', released in fall 2006, is currently receiving airplay and good reactions on several radio stations like TopRadio and RockFM. It can also be heard on websites like http://www.myspace.com/warrisk3 - www.warrisk3.blogspot.com

Troughout the years, we played gigs with many well known bands like The Exploited, The Kids, Funeral Dress and Red Zebra. But it's not all party time, We also like to be socialy engaged. That's why we sometimes do charity gigs like mucovisidose-, tsunami- and homeless children-benifits, to name a few.

Onno Cromag (Aardschok magazine) : "WR3 is a band I rate highly since many years, but who still don't get the respect they deserve. The band reminds me of the big names in punk history."

Nugget (DIY-PUNK magazine) about the 'Thank you Mr President' CD : "...If you have the chance to go see one of their shows, don't hesitate and go! You won't regret it! 'Thank you Mister President' is a very catchy and recognizable song, specially because of the little lead guitar-riff. The vocals are pretty cool too. Singer Wim has a very raw voice that strikes you without any warning...Songs like 'This is what we are', 'Thank you Mister President', and 'Love will tear us apart' (the Joy Division cover, wich is very cool too!) + the cool artwork + the pictures makes this cd worth buying!"