Vince and the Sun Boppers - By Request 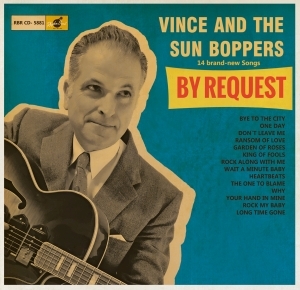 In this long playing album, Vince displays his characteristic style on such great rockers as “Bye To The City”, “Heartbeats” and “Rock My Baby”. As a balladeer, Vince shines on “Garden Of Roses”. Country fans will certainly love “Your Hand In Mine” and “Why”. These are the rockers and ballads Vince has written himself, only exception is “Ransom of Love”written by Luca Ciriacono. After the great success of the album “Spinnin´ Around” in 2016, there has been a rising demand for new recordings on new albums. Vince is now ready to give you what you asked him for, … a new long playing album!
Rhythm Bomb´s … By Request will be a welcome addition to the record libraries of the many fans who know Vince and the Sun Boppers for their best – selling records.
6
What's This
Advertisement