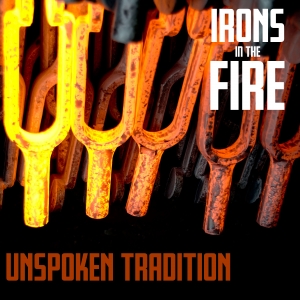 If you think bluegrass songs are all about looking back at an idealized past, get ready to have your mind changed by the latest single from western North Carolina’s Unspoken Tradition. Recorded in the middle of the pandemic year, “Irons In The Fire” captures the corrosive effects of dreams deferred and the anxiety and urgency that surround their — and our — emergence from the enforced idleness of quarantine.

For the group, the moment is particularly significant, as they grapple with the suspension of a touring career just on the cusp of new growth when the concert industry shut down. As a group, their response was straightforward enough: settling into the recording studio, they issued 4 charting singles over the course of the past year (with still more yet to be released) that documented their musical growth. In the meantime, the opportunities for reflection left their own mark on the quintet’s members — and hit songwriter Aaron Bibelhauser, too.

“In the bluegrass world,” he notes, “many of us juggle much more than just a career as a professional musician. Some of us have full time day jobs, side gigs as a session musician, radio host, songwriter, etc. — and there’s always behind-the-scenes music business work to be done as well. That sentiment is strikingly obvious within the top shelf delivery of ‘Irons In The Fire’ from Unspoken Tradition. Ironically, my co-writer and uncle, Steve Guenthner, retired from his own career in the business world shortly before I asked him to lend a hand with this song. He certainly provided some contrasting wisdom to bring the song full circle in recognizing that, no matter how much work there is left to do, or how challenging the road ahead appears, freedom lies in the path forward... the journey, not the destination.”

Though its musical drive is squarely in the bluegrass wheelhouse, “Irons In The Fire” takes level aim at a thoroughly contemporary state of mind in its insistent refrain, “Where’s the freedom I’ve been hoping for so long?” — and the he result is, as lead singer Audie McGinnis notes, quintessential Unspoken Tradition:

“This song spoke to me on first listen; there was no ‘break in’ period to allow it to grow on me. Early on in the band's life, we started using the slogan ‘working class bluegrass’ as an attempt to brand ourselves and connect with our audience. I still think we hold true to that slogan today. With that in mind, it just feels like this song was written for us.”

Unspoken Tradition is about new, original bluegrass. Inspired by their own influences and the roots of traditional music, they bring a sound that is both impassioned and nostalgic, hard-driving but sincere. Their 2019 release from Mountain Home Music Company, Myths We Tell Our Young, debuted at #5 on the Billboard Bluegrass charts and has seen 5 top-charting radio singles, including a #1 spot on the Bluegrass Today chart for “Dark Side of the Mountain.” Their material is mostly original and reflects the ever-changing culture of Western and Central North Carolina where they call home. The band has earned a fervent following in the Southeast, selling out shows in Asheville, NC as well as the legendary Station Inn in Nashville, TN. With heavy airplay on Sirius XM’s Bluegrass Junction and ever-growing streaming numbers, Unspoken Tradition is a fast-rising voice of a new generation of roots music artists.