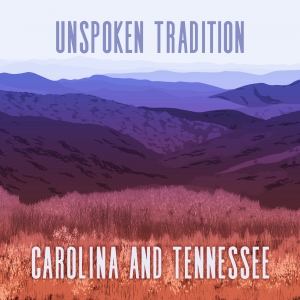 Almost from its earliest days, bluegrass has found a way not only to speak of personal themes such as lost love and longing for home, but also to address the whole range of human concerns and behaviors. From stories of economic hardship to meditations on the contrast between farm and city life, its artists have never demurred from offering their perspectives on the society in which they live — and when they deliver a song that works on both a personal and social level, the results can be truly special.

With their latest single, western North Carolina’s Unspoken Tradition presents such a song, given a beautifully burnished treatment that introduces a new lead voice in its newest member, Saravanan (Sav) Sankaran. Co-written by Kentucky’s Aaron Bibelhauser, whose credits include Balsam Range’s smash hit, “Blue Collar Dreams,” “Carolina And Tennessee” draws on natural imagery — and iconic geography — to offer a vision as meaningful for social relationships as it is for personal.

“What originated as a love letter acknowledging the picturesque beauty and peace in the Smoky Mountain regions of Western North Carolina and East Tennessee has grown into something much more profound with Unspoken Tradition’s take on ‘Carolina & Tennessee,’” says Bibelhauser. “Of course there’s the obvious metaphor equating the two states with two partners walking through the happiness and hardships of love. But something bigger crept its way in as my co-writer, Pat Younger, and I crafted the tune, and even more so when the band worked up their own rendition for this single release.”

Adds Sankaran, “I knew from the moment I heard Aaron Bibelhauser's demo of 'Carolina and Tennessee' that we had to record it! I'm so excited for it to be my first opportunity to sing lead on an Unspoken Tradition track. The subject material of the lyrics was one of the things that drew me to the song; the idea of ‘finding out that our boundaries [are] imaginary lines’ resonates so deeply during such polarized times in our world. The song took on even more meaning having been created during a time of forced isolation, in which we have all been reminded of the importance of all of the relationships in our lives, romantic and otherwise. I think this song really illustrates the band's versatility; it allows me to showcase my lead vocal, and the guys provide instrumental and vocal accompaniments that add depth and complexity without distracting from the message of the song. Unspoken Tradition has always been about crossing those ‘imaginary lines’ that define what a modern bluegrass band is; ‘Carolina and Tennessee’ is no exception!"

“I believe the deeper message that Unspoken Tradition delivers here is that there is a simple underlying fact that transcends the imaginary lines that divide us,” Bibelhauser concludes. “WE ARE ALL HUMAN BEINGS. It may not soften the blow of the immense societal challenges ahead of us, but it certainly shines a light of hope to recognize that we are all deserving of human dignity, respect, and love.”

Listen to “Carolina and Tennessee” HERE.

About Unspoken Tradition
Unspoken Tradition is about new, original bluegrass. Inspired by their own influences and the roots of traditional music, they bring a sound that is both impassioned and nostalgic, hard-driving but sincere. Their 2019 release from Mountain Home Music Company, Myths We Tell Our Young, debuted at #5 on the Billboard Bluegrass charts and has seen 5 top-charting radio singles, including a #1 spot on the Bluegrass Today chart for “Dark Side of the Mountain.” Their material is mostly original and reflects the ever-changing culture of Western and Central North Carolina where they call home. The band has earned a fervent following in the Southeast, selling out shows in Asheville, NC as well as the legendary Station Inn in Nashville, TN. With heavy airplay on Sirius XM’s Bluegrass Junction and ever-growing streaming numbers, Unspoken Tradition is a fast-rising voice of a new generation of roots music artists.