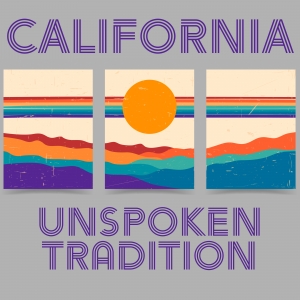 After a pair of well-received singles that allude to their home state and its neighbors (“Carolina And Tennessee,” “Back On The Crooked Road”), Western North Carolina’s Unspoken Tradition turns to the west with their newest single, “California.”

The release reveals another, subtler side to the quintet’s musical palette. Where harmonized vocals have been a regular feature of their work, “California” focuses the spotlight entirely on guitarist Audie McGinnis, who foregos his characteristically urgent vocal delivery in favor of a more nuanced, understated approach to convey the song’s wistful lyric. Similarly, the track’s innovative arrangement draws on the talents of bassist Sav Sankaran and fiddler Tim Gardner to create echoes of a string quartet that accentuate its melancholy tone.

Written by GRAMMY® nominee and labelmate Thomm Jutz and California singer-songwriter Miriam Speyer, “California” hints, without saying outright, that its narrator, “down on Lower Broadway with the California blues,” is one of the countless number of aspiring musicians who’s headed for Nashville, only to be disappointed. Yet though it artfully works in a reference to Hank Williams, the story remains blurry enough that, when the narrator confesses “The grass is always greener on the other side, But I think I’m getting tired of the same old ride,” it speaks more broadly to the longing for comfort of anyone who’s moved to a strange place in pursuit of a dream that remains out of reach.

“I think we've all found ourselves wishing we could be in two places at once,” says McGinnis. “For me, this song is about that. Maybe the narrator came to Nashville chasing a dream, but only realized what he'd left behind once he'd arrived. As a bluegrass musician, I also find this song interesting because it's about someone wanting to head West to get back home. Most songs in this genre are about missing and longing for the heart of the Blue Ridge Mountains, but this one paints a different image.”

“Musically, I loved the challenge this song presented for us,” he adds. “I love all types of music, but I gravitate toward aggressive, driving bluegrass. It took a certain attention to detail to do this song justice. The stripped down first verse, as well as the bowed bass/fiddle pair in the chorus really accentuate the nuances of this song. I think it showcases our versatility—and It's truly a beautiful song.”

About Unspoken Tradition
Unspoken Tradition is about new, original bluegrass. Inspired by their own influences and the roots of traditional music, they bring a sound that is both impassioned and nostalgic, hard-driving but sincere. Their 2019 release from Mountain Home Music Company, Myths We Tell Our Young, debuted at #5 on the Billboard Bluegrass charts and has seen 5 top-charting radio singles, including a #1 spot on the Bluegrass Today chart for “Dark Side of the Mountain.” Their material is mostly original and reflects the ever-changing culture of Western and Central North Carolina where they call home. The band has earned a fervent following in the Southeast, selling out shows in Asheville, NC as well as the legendary Station Inn in Nashville, TN. With heavy airplay on Sirius XM’s Bluegrass Junction and ever-growing streaming numbers, Unspoken Tradition is a fast-rising voice of a new generation of roots music artists.
13
What's This
Advertisement