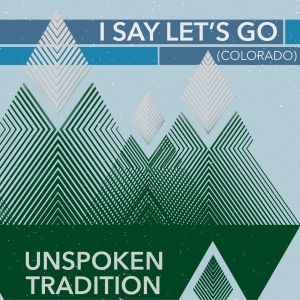 Unspoken Tradition has released a new song from their upcoming album that speaks to people’s restless spirit and the need to escape the daily grind.

“I Say Let’s Go (Colorado)” is an upbeat, pop-tinged tune written by Unspoken Tradition vocalist and bass player Lee Shuford that is timed perfectly for the winter season. Like many musicians these days, Shuford is also full-time teacher as well as a writer and performer. He says, “For me, and hopefully others that listen to it, the song is really about self-motivation. People work really hard to provide stability for themselves and their families and sometimes forget to take the shot when they have the chance and do the things they've always wanted to do. I think my favorite sentiment from the song is that life can pass you by if you don't sometimes just say ‘Let's go.’”

This single is part of an upcoming, mostly original 10-song release from the band that includes prior singles released throughout 2018. One of these, “Dark Side of the Mountain,” which also features Shuford’s vocals, reached the #1 spot on the Bluegrass Today chart on October 26.
“I Say Let’s Go (Colorado)” includes the driving timing of Zane McGinnis on banjo and Ty GIlpin on mandolin as well as the vocal harmonies and bright, bouncy guitar and fiddle work of Audie McGinnis and Tim Gardner.