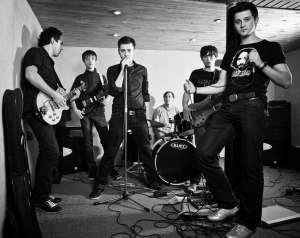 The two singers, Pavel (26) and Sergiu Caruntu (23), were quite young - about 8 years old when they started to deal with music. They studied at musical school to fulfill their parents' wish. Although they weren't musicians, they thought that the brothers should learn music. While in music class, they played a lot in a chorus with different instruments: Pavel played the whistle instrument first and later the clarinet, and Sergiu played the violin. They gained experience as members of their first band, "Escape" which was founded in 2003 with 3 other boys (singers). It was a pop music band and existed for two years. Then, they met Alex Brashovean, a popular Moldovan composer, who composes 80% of the no.1 hits in his home country, Moldova, and lots of hits in Romania and worldwide. At that time Alex was very young, 17, and the brothers met him at the Moldovan national final of the Eurovision Song Contest in 2006. Alex proposed a song for the band "Escape", but Pavel and Sergiu decided to leave that band to found "Unbreakable". Alex Brashovean became their music producer and composer, while Elena Buga was writing the lyrics for the band. With this strong collaboration they were improving day by day and getting better and better. They participated in several contests, like GBOB Moldova in the fall of 2007 or "Battle of the Bands" on a website for unsigned artists - The-Muzic.com, which they won as the highest rated artist, and they are now no.1 on the chart since their registration on the site.
They are gathering more and more fans all over the world, from Japan to Texas and their songs are being played on - besides Moldovan and Romanian radio stations - several others (mostly online) from different countries like Germany, UK, and USA. Although they were born in Chisinau (Republic of Moldova), their dream is to get noticed outside of Moldova, in bigger countries where such musicians have more chance to prosper. Unbreakable play and sing 100% live in concerts. They are 7 members, playing various instruments. To prepare for the international market, they changed the language of the songs from Romanian to English.
Advertisement