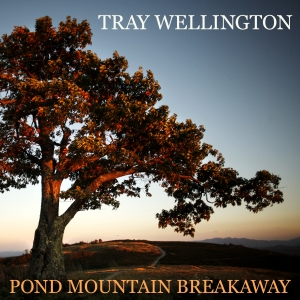 There are few things more exciting than witnessing a talented young artist take a new leap in their career. With “Pond Mountain Breakaway,” his first release for Mountain Home Music Company, 21-year-old Tray Wellington — already an award-winning banjoist — is doing just that, offering a distinctive instrumental voice backed by a stellar group of musicians already known for the cross-genre fluency that is quickly becoming his trademark.

“Pond Mountain Breakaway,” a Wellington original, is a tune that’s at once sophisticated and accessible, combining dynamic, syncopated passages with straightforward bluegrass progressions in a dynamic interplay that will remind listeners of past classics in the “progressive” lineage that traces back at least as far as the 1970s. To flesh out the tune’s initial outlines, producer Jon Weisberger turned to Organic Records’ guitarist Jon Stickley and his bandmate, Lyndsay Pruett (violin), along with mandolin master Wayne Benson (Bluegrass at the Crossroads, Russell Moore & IIIrd Tyme Out), who contribute engaging solos and rock-solid rhythm alongside Zoe & Cloyd’s bassist, Kevin Kehrberg.

Says Wellington, “I actually wrote the main riff to this song while playing electric guitar — but then, while playing banjo the same day, I tried it out with more of a bluegrass feel, and thought, ‘Wow, it would be cool to write a fast, upbeat instrumental around it.’”

“I got to the session late because my car broke down on the way, and while I was trying to think of a name for the tune during the actual recording session, Wayne Benson asked me, ‘Where did you break down?’ I replied, ‘A place called Pond Mountain,’ and he said, ‘Call it ‘Pond Mountain Breakdown,’” he continues. “I thought that was a great idea, but as I was thinking about it later, I realized that I don't get a full breakdown vibe from this tune — and when I thought that a little variation in bluegrass titles wouldn't be a bad thing, I decided to make a slight change to ‘Pond Mountain Breakaway.’”

By whatever name, “Pond Mountain Breakaway” shows that Tray Wellington, already the recipient of an International Bluegrass Music Association 2019 Momentum Instrumentalist award, has a musical vocabulary and vision that have earned the respect of colleagues from all corners of the bluegrass world — and now listeners will have a chance to see why.

With growing acclaim for his talent and a lengthening list of his own, individual accomplishments — including the release of his debut solo EP; leading workshops at Merlefest and Grey Fox; a coveted position as an assistant at banjo master Bela Fleck’s Blue Ridge Banjo Camp; a cover story interview in Banjo Newsletter; and an invitation to Mike Marshall’s prestigious Acoustic Music Seminar — Wellington decided to blaze his own musical and professional trail, showcasing with the Tray Wellington Band at the IBMA’s virtual World of Bluegrass in the fall of 2020. He graduates from East Tennessee State University in early 2021.