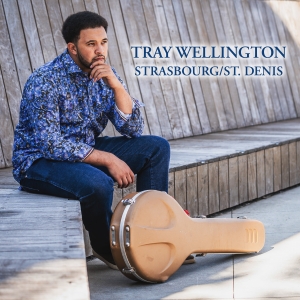 For his third Mountain Home release, Tray Wellington returns to the jazz songbook that he first explored on his self-released 2020 EP, Uncaged Thoughts, with a cover of Charlie “Bird” Parker’s bebop classic, “Ornithology.” This time, the award-winning banjo player offers his unique take on a 21st century classic in the making in trumpeter Roy Hargrove’s popular “Strasbourg / St. Denis” — and though he’s young, Wellington sets the pace for a stellar group of musicians (guitarist Jon Stickley and his Trio bandmate Lyndsay Pruett on violin, mandolin player Wayne Benson and bassist Kevin Kehrberg) as they work their way through the tune’s irresistible theme before diving into a series of inspired improvisations. The result is a tribute to Hargrove’s inspiration that recalls the sound of Wellington’s jazz-leaning predecessors like Bela Fleck and Scott Vestal even as it displays a strong dose of his own creativity.

“As a longtime jazz fan,” Wellington notes, “I see Roy Hargrove as a staple, and a legend in the music. I knew from the first time I heard this song that I wanted to record it some day, and with this crew playing on the session, I knew this would be the perfect time to do it!"

With growing acclaim for his talent and a lengthening list of his own, individual accomplishments — including the release of his debut solo EP; leading workshops at Merlefest and Grey Fox; a coveted position as an assistant at banjo master Bela Fleck’s Blue Ridge Banjo Camp; a cover story interview in Banjo Newsletter; and an invitation to Mike Marshall’s prestigious Acoustic Music Seminar — Wellington decided to blaze his own musical and professional trail, showcasing with the Tray Wellington Band at the IBMA’s virtual World of Bluegrass in the fall of 2020. He graduates from East Tennessee State University in early 2021.