Tray Wellington - Half Past Four [Single] 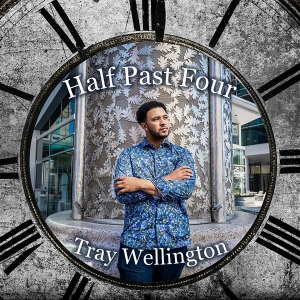 Following the release of his first single for Mountain Home Music Company, the newgrass-flavored original, “Pond Mountain Breakaway,” banjo phenom Tray Wellington gives a nod to tradition with a banjo-centered, ‘grassed-up arrangement of a popular old time fiddle tune, “Half Past Four.” The performance, which finds Wellington trading solos with some of the most innovative yet grounded instrumentalists to be found under the big bluegrass tent, shows off the youngster’s exuberant approach to tradition — and his ability to more than hold his own with more experienced players.

Though it’s not well-known among bluegrass players, “Half Past Four” is a near-standard among old-time musicians. The tune was composed by blind Kentucky fiddler Ed Haley (1885-1951), whose catalog was largely obscure until his music caught the ear of bluegrass Hall of Famer John Hartford. By the start of the 21st century, Hartford had not only recorded a large number of Haley’s tunes, but had transcribed many more, and even supervised a collection of Haley’s home recordings. Though Hartford never recorded the tune himself, veteran members of his string band put it on a 2010 tribute to the legendary composer of “Gentle On My Mind” — though by then, it had already entered the repertoire of old-time fiddlers and banjo players alike.

Wellington’s version of the tune takes a more assertive approach, with the assistance of a stellar group: guitarist Jon Stickley, mandolin master Wayne Benson, fellow Mountain Home artist Carley Arrowood on fiddle, and Zoe & Cloyd’s bassist, Kevin Kehrberg. From a classic fiddle-and-banjo start, the track dashes joyously through the tune, with frequent trade-offs among the players keeping things lively to the very last notes. "As a John Hartford and Ed Haley fan,” says Wellington, “I knew when I heard this song, I wanted to put a modern, unique twist on it that would make it my own version. And with the musicianship of these players, from Carley's powerful fiddle kickoff, to Stickley's killer rhythm, to the groove of Kevin’s bass, and Wayne's playing, it ended up being a great track."

“We had been looking for something that could showcase Tray’s solid traditional chops and ability to put his own stamp on old tunes,” notes producer Jon Weisberger. “And then, not long before the session, I caught Tray’s Bluegrass Ramble performance presented by the IBMA — and when his group ended that virtual showcase with ‘Half Past Four,’ I knew we’d found the perfect choice.”

With growing acclaim for his talent and a lengthening list of his own, individual accomplishments — including the release of his debut solo EP; leading workshops at Merlefest and Grey Fox; a coveted position as an assistant at banjo master Bela Fleck’s Blue Ridge Banjo Camp; a cover story interview in Banjo Newsletter; and an invitation to Mike Marshall’s prestigious Acoustic Music Seminar — Wellington decided to blaze his own musical and professional trail, showcasing with the Tray Wellington Band at the IBMA’s virtual World of Bluegrass in the fall of 2020. He graduates from East Tennessee State University in 2021.