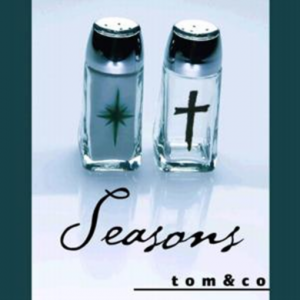 tom&co was the praise band for Vineville Baptist, then Vineville North Baptist Church in Macon, GA – now known as Northway Church. tom&co performed over 60 times a year 1994-2006 with a remarkably stable group of members. They recorded two albums – Brethren, and Seasons.

The band took familiar tunes and put a new musical twist to them – all in an accessibly creative way that was fun for your feet and bodacious for your brain.

YES, they played this stuff in church!

The core band included Tom Rule on keys, Dan Wallace on bass, and Dennis Palmer on percussion, as well as a changing cast of characters that included Dr. Ed Clark on sax, Mark Holloway on guitar, Phil Norris and Frank Jones on guitar, and others too numerous to mention here. You’re probably not even getting this far in this paragraph, so it’s time to move on……

Tom and Dan were the last remaining members of tom&co to play at Northway – changes at the church necessitated a change in layout and nomenclature. Tom left Northway after 18 years as a staff member to become the choir accompanist and pianist for First Presbyterian church in 2012. Dan Wallace is still playing bass at Northway – and with the Joey Stuckey Band at times.

All tunes are in the public domain [with the exception of two arrangements from Brethren].
All Arrangements are copyright Tom Rule (ASCAP).