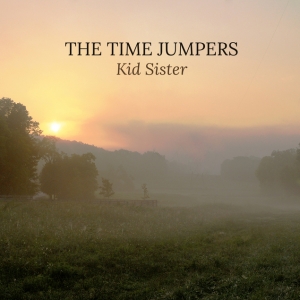 Official video for "I Miss You:"
https://www.youtube.com/watch?v=DtrBlfY3XoQ

The ‘kid sister’ of the title is Dawn Sears, The Time Jumpers’ infinitely versatile “girl singer,” who died Dec. 11, 2014 after 10 years of gracing the band and 22 years of touring as harmony singer for Vince Gill, now an enthusiastic Time Jumper himself. She was the wife of Time Jumpers bandleader and fiddler, Kenny Sears.

Gill and his wife, Amy Grant, were doing a Christmas show at Nashville’s Ryman Auditorium the night Dawn died. “I remember it vividly,” he says. "I felt Dawn’s presence come through the Ryman at the moment she passed, I think to tell me goodbye or give me the finger, or maybe both. I didn’t know, but I felt something in the room that was beautiful. Then Kenny told me the following morning she was gone. I came home after the Christmas show and spent maybe two hours reminiscing about Dawn, listening to her sing, still not knowing she had passed. When I got the news, I sat down and realized I had to put this in some form of a song.”

Thus was born the album’s title track and emotional focus. In “Kid Sister,” Gill sings Dawn from this life to the next, marveling all the while on her remarkable presence and voice. “I smiled when you laughed,” he croons to her, “and I wept when you sang.”

The album was conceived and started in mid-2014, before cancer stripped Dawn of her ability to sing. And so the first two tracks feature her voice. On the sprightly “My San Antonio Rose,” the last song she sang before losing her voice, Kenny says there were certain vocal lines she wanted to do over but couldn’t. Knowing that, Gill suggested Kenny sing the lines Dawn would have been dissatisfied with, thereby turning an intended solo into a duet recording.

“I Miss You,” the other Dawn cut, first saw life as a song Gill co-wrote and recorded for his most recent album but didn’t use. On it, Dawn sang harmony. To give it a proper place in this group album, Gill stripped off the original instrumentation and rewrote some of the lyrics to reflect Kenny’s perspective on missing Dawn and had The Time Jumpers replay all the music.

“To me, it was an honest way of using technology for something worthwhile,” Gill says.

Kenny says The Time Jumpers lost more with Dawn’s passing than just her soul-thrilling voice. “Dawn was quite a prankster,” he recalls. “She brought a lot of levity to the band. She was always leaning over and whispering into someone’s ear to break them up. We were kind of accustomed to that. She brought a lot of common sense as well.”

For the uninitiated and yet-to-be dazzled, the four-time Grammy-nominated The Time Jumpers is a 10-piece band made up of superpickers who normally pay their bills by working recording sessions or touring with major artists. Since Monday is usually a night off from their regular labors, they get together at the 3rd & Lindsley club in Nashville each week to play country songs that lean heavily toward western swing. They have become so popular that big-name artists routinely drop by to join them on stage or simply cheer them on. Among those drop-bys were Bonnie Raitt, Reba McEntire, Norah Jones, Robert Plant, The White Stripes, Kings Of Leon, Sheryl Crow, Joe Walsh, Elvis Costello, Jimmy Buffet and Kelly Clarkson.

With the release of Kid Sister, the band now has its own official theme song, a scorched-earth romp called “We’re The Time Jumpers.” Gill, who wrote the tune, name-checks every member of the band in the lyrics, as well as giving a nod to Dawn. He says he was inspired by the Texas Playboys’ show-opener. “I thought, ‘Hell, they got a theme song. We need one.”

Since each Time Jumper is something of a scholar in western swing and traditional country music, the band had no trouble selecting songs for Kid Sister. “We always just pick things as we go,” Sears explains. “We knew that we wanted to do Paul’s instrumental, “All Aboard,” and Joe wanted to do ‘I Hear You Talkin’,’ which he’d discovered watching an old Bob Wills movie. But a lot of the new stuff Vince just brought in the day of recording and said, ‘Here’s something. What do you all think of this?’ If we liked it, then we’d start piecing together an arrangement.”

Gill shies away from taking producer credit. “All I really did was a lot of the leg work, the extra stuff—vocal comping, harmony singing and a few edits to tighten things up,” he says. “I spent a little extra time on the record because it was cut at my house and I could do it. But the record’s really produced and arranged by the band. It’s such a great democracy.”

Sears agrees. “What we have with The Time Jumpers is unique and very special. We all respect each other’s opinions and each other’s ability. If someone brings a song in, we’re all listening to it carefully because we know it must be something pretty good or they wouldn’t have brought it.”

The collective choices for Kid Sister are clearly inspired ones. Franklin’s steel guitar-driven “All Aboard” roars with the excitement and inevitably of a runaway freight train as each member takes a turn at pouring on the instrumental coal. “I Hear You Talkin’” is a Cindy Walker gem from the 1940s that both she and Bob Wills recorded before Faron Young ran it up the country charts in 1959.
Another Time Jumpers resurrection is “Bloodshot Eyes,” a slice of comic despair that became a Top 5 hit in 1950 for its co-writer, Hank Penny, and later an Asleep At The Wheel staple. Gill brings back “Table For Two,” the achingly forlorn lament he and Max D. Barnes first contributed to Loretta Lynn’s 2002 album, Still Country.
Also here from Gill’s pen are the wistfully yearning “True Love Meant For Me,” the playfully regretful “Honky Tonkin’” and the begging-to-bagging “Sweet Rowena.”
Rounding out the list are “Empty Rooms,” a case study in the architecture of gloom written and sung by Ranger Doug; Billy Thomas’ veritable trail of tears, “Blue Highway Blues,” and Sears’ stately valedictory to Dawn, “This Heartache.”

That Kid Sister features 14 songs rather than the usual 10 to 12 is a reflection of The Time Jumpers wealth of vocal talent. “When we were planning the album,” Gill says, “I went to the record company and said, ‘This isn’t typical. There are seven singers here. If you make an 11- or 12-song record with one singer, that’s plenty. But with seven singers, you have to have enough songs to go around if you’re going to make it interesting.”

On this point, he clearly prevailed in every way.
36
What's This
Advertisement