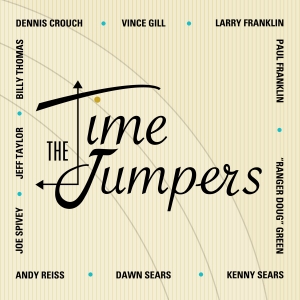 
The Time Jumpers Biography
Tap any member of The Time Jumpers on the shoulder and the face that turns to greet you will be that of one who’s made major contributions to the richness and vigor of country music.

The Time Jumpers was established in Nashville in 1998 by an assemblage of high-dollar studio musicians who wanted to spend some spare time drinking beer and jamming with their sonically gifted buddies. The notion of building a rabidly devoted following was the last thing on their minds. But that’s what happened. Learning that Monday evenings were the slowest in the week for the Station Inn bluegrass club, the superpickers settled into that fabled venue at the start of each week and set up shop. Pretty soon Monday nights were sounding a lot like Saturday nights—and drawing commensurately lively crowds.

As word spread along Music Row that something special was happening at Station Inn, big stars began dropping by, some to sit in with the band, others just to enjoy the vast array of country, swing, jazz and pop standards The Time Jumpers rejoiced in playing. Among those drop-bys were Bonnie Raitt, Reba McEntire, Norah Jones, Robert Plant, The White Stripes, Kings Of Leon, Jimmy Buffet and Kelly Clarkson. None asked for their money back.

To list the artists these pickers have recorded and toured with would be tantamount to posting all the Billboard country charts for the past 30 years. Suffice it to say that the list ranges from Ray Price to John Anderson to Carrie Underwood. And the stages these luminaries have graced extend from the Grand Ole Opry to Carnegie Hall. That there are three fiddles in the band is a tipoff that these guys have an overwhelming affection for western swing.

The new Rounder album reveals a side of The Time Jumpers that’s largely gone unheralded—that is the members’ ability to write vivid new songs in the stylistic vein of the standards they love to perform, whether they’re breezy, euphoric dance tunes or mournful testimonies to the destructive power of love.

Let’s start with Larry Franklin’s fiddle fantasia, “Texoma Bound.” Talk about music made visible! You can almost see tiny figures skipping along the tips of ocean waves as the three fiddles race along at breakneck speed, sometimes in unison, sometimes veering away from formation like the Blue Angels in flight. Jeff Taylor’s accordion flourishes gives the fiddles a run for their money. Even Bob Wills would have been dazzled by this one.
Kenny Sears’ “Nothing But The Blues” turns a purely personal problem into a danceable moment as he bemoans a lover gone astray, a situation complicated by his best friend who’s giving her comfort. Depression never sounded so good. “Ranger Doug” Green—“the idol of American youth” in his customary role as front man for Riders In The Sky—channels the sounds and imagery of Sons Of The Pioneers in his “Ridin’ On The Rio,” the tale of a wandering cowboy and the senorita who waits for him back home.

In her classic country lament, “So Far Apart,” Dawn Sears looks back to sunnier times as she sings of a once-torrid relationship that’s cooled almost to the point of freezing. Can it be revived? That’s her plea.

Vince Gill, the 20-time Grammy winner and member of the Country Music Hall of Fame and the Nashville Songwriters Hall of Fame, contributes five songs. “Faint Of Heart” is a smooth, smoky, jazz-inflected rumination on the theme that love tales real commitment and stamina. “The Woman Of My Dreams” ponders the irreplaceable loss of the ideal lover, a bleak mood further darkened by Paul Franklin’s mournful steel guitar.

Sadder still is “New Star Over Texas,” in which the singer sees in the night sky a sign of the loved one whom “only heaven” could have taken from him—and did. “Three Sides To Every Story” acknowledges the complex reasons a relationship goes, observing that in each situation there’s “your side, my side, and the truth.”

Gill turns flirtatious, however, in the bouncy “On The Outskirts Of Town,” inviting a lady of some experience to join him in the myriad delights of the Twilight roadhouse, where “they love to play the jukebox loud.” It’s quite an impressive sales pitch.

The three remaining songs are from outside the band. Mundo Earwood’s “Texas On A Saturday Night” features Kenny and Dawn singing alternating verses and paints such an irresistible picture of good times that you’d think it was commissioned by the Texas Chamber of Commerce.

Johnny Mercer and Robert Emmet Dolan’s “Yodel Blues” is a perfect showcase for the vocal gymnastics of Ranger Doug, Dawn, and Vince as they contrast the differences between the New York City and Texas ways of life. There’s no surprise as to which locale comes out on top.

Harlan Howard and Bill Hervey’s “Someone Had To Teach You” was recorded earlier by George Strait and Wade Hayes. Here Dawn gives the song a decidedly feminine twist in which it’s the man—not the woman—who has to be taught how to cry.

It’s a fitting way to wrap up this extraordinary album.

In the spring of 2012, The Time Jumpers departed their beloved ancestral home at the Station Inn to provide more seating for their fans at the substantially larger 3rd & Lindsley nightclub near downtown Nashville.

So if you’re in Music City on a Monday night, please swing by. You never know who else will be there. But you can always be sure the music will be spectacular.
45
What's This
Advertisement