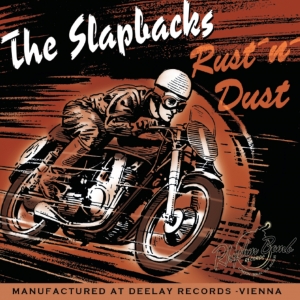 The Slapbacks - Rust 'n' Dust
Keep it simple ...
…has always been the band's credo: two screamin' guitars, a slappin' double bass, a rhythmic snare drum and a soulful voice – what else do you need? NOTHIN' – at least from the band member's point of view because this is exactly the cast of THE SLAPBACKS: 4 men – 4 instruments – pure music without compromises. Capturing the very essence of Rockabilly music with this formula it also turned out to be the most uncomplicated way of performing, recording and having fun.Its been a while (2009 !) since THE SLAPBACKS from Vienna, Austria released their last full lenghts CD „ Buckle Up“. The band started more than 20 years ago in 1995 as a drumless trio. The Slapbacks added a drummer some time ago and its been a great addition to their sound. „Rust n Dust“ is – after all these years – a great follow up. It features 14 original songs, all written by singer and leadguitar player MICHAEL NEHYBA. Recorded at their own studio DEELAY RECORDS its a journey back in time, when great recordings happened in the 1950s in the kitchen or in the garage. Pure, authentic, simple, thats what it is!

The Slapbacks
There’s no need to introduce The Slapbacks. Hailing from Vienna/Austria, these guys are a household name in the European Rockabilly scene since 1995. They played countless shows and drove thousands of miles all around Europe and the US and are well known for their easy going but at the same time highly professional working style, on and off stage.
As a classical four piece outfit with two guitars, double bass and only a snare drum(!) The Slapbacks play wild authentic 1950s Rockabilly spiced up with a slight dose of Rockin‘ Blues mixing up their setlist with well chosen covers everybody wants to dance to and a considerable amount of originals. It’s this musical diversity that makes them special and much recognizable.
Since their entrance to the world of recording The Slapbacks have recorded seven albums and several songs have appeared on international Rockabilly compilations.
The latest platter, Rust ‘n‘ Dust, is published by rockin‘ roots label Rhythm Bomb Records and contains not less than 14 self written songs. Recorded the way it should be done (i.e. live in one room without overdubs and analog on tape machines) the sound of Rust ‘n‘ Dust is wild and fresh but also authentic and doing 1950’s Rockabilly justice. It captures the atmosphere of men riding their motorbikes, drinking beer and just having a good time.
So take a sip and blow your top - The Slapbacks make sure that the bop won’t stop!
6
What's This
Advertisement