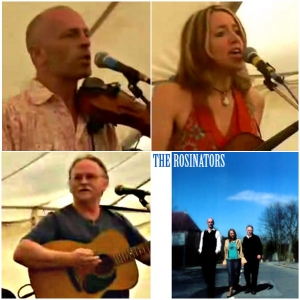 UK band The Rosinators have a reputation for their raw mix of bluegrass, Cajun and gospel country, and their dynamic three-part vocal harmonies. Twin-fiddles and acoustic guitar make up their distinctive sound, augmented with banjo and mandolin, with the addition of string bass and drums for some shows. The band, whose repertoire ranges from traditional a cappella to their own twenty-first century country blues, play roots music from the heart.

Bridgnorth Folk Festival UK
Since the release of The Rosinators’ eponymous debut CD, a busy touring schedule has taken them to new audiences in Holland, Ireland and the UK, including Glastonbury Festival, Brighton, Bath, Cheltenham and Edinburgh Fringe Festivals, in addition to playing main stages at major British folk festivals from Bridgnorth to Broadstairs.

Glastonbury Festival UK
They were selected as one of six finalists in the Glastonbury Unsigned Band Competition (Acoustic Stage) and also received the "Hotdisc Best Track of the Year Award" at the UK Country Radio Awards Show.

Glastonbury Festival UK
The Rosinators have also been enjoying extensive global airplay, the majority of this in North America, on both mainstream and specialist stations - a testament to both their original sound and to their authentic delivery.

Paul Castle (guitar, banjo, vocals) was an original member of the UK acoustic outfit Sons of Fat Harry. He is a songwriter and composer whose material has been taken into the charts by Frances and Mary Black and whose music for UK TV (notably the BAFTA winning Old Bear Stories has had global exposure.

Will Sneyd (fiddle, mandolin, vocals), was a founding
member of Ti-fer Cajun Dance Band. He has toured with Alabama 3 and features on their albums, “Exile in Coldharbour Lane' and 'Last Train to Mashville'.

"When American roots music deejays rave about bluegrass passion, Cajun verve and country-gospel authenticity, you know that The Rosinators are the real deal. From deep in the heart of Balham Alligator territory, the London-based trio have added their own stamp to the American old time tradition so convincingly that most of their radio airplay comes from US stations. Formed in 2001, they blazed out of the traps with dynamic three-part vocal harmonies and fiery twin-fiddle attacks driven by crackin' guitar picking." Edinburgh Festival Fringe

"Paul, Fliss and Will are three excellent musicians who absolutely love to play - enthusiastic, joyful and really good people. When the Rosinators play everyone in the room has a smile on their face. Go to see them. Get the album. You won't regret it." Gail Comfort, CMR Nashville

"Rapidly gaining a reputation as one of the UK's finest bands...if you've not heard their music then you really are missing something great!!" Dee Hallett, British Bluegrass News

"On this their debut album, The Rosinators give it to you straight: excellent musicianship and harmonies to die for....It's honest and passionate. On the first listening I was under it's spell; on the second I was hooked! This is real acoustic roots at its best. Don't let this one pass you by!" Gerry Mansfield, Maverick Magazine

"Your CD arrived today---what can I say?---
IT BLEW ME AWAY. Just such a wonderful
piece of work. I wish I could play it all on
the air." [Bill Hahn, WFDU FM, New Jersey USA]

"Ranks very high on my "Juju" list as
one of the better discs I have received
this summer - really you all have done
a stunning job!....Spectacular!"
[Chris Darling, WMPG FM, Portland, Maine, USA]

"This fabulous group will brighten up my show
with their fantastic approach to bluegrass music...
excellent, marvellous and pure class"
[Ted Clark, Grensland Radio, Holland]