"The Night Before Christmas"-Jack Palance Narrates 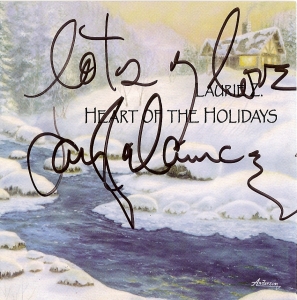 As people listen to the album, "Heart of the Holidays" they can easily recognize one distinctive voice that endeared movie audiences throughout the world for many years.

In 2001, actor, painter and poet Jack Palance joined pianist Laurie Z. on a new musical album produced for the holiday season. With Laurie playing softly in the background, Palance's trademark voice presents a delightful reading of Clement Moore's "Twas the Night Before Christmas". And despite the years that transpired since Palance last recorded a song, his voice carries through in a lovely upbeat rendition of "I Saw Mommy Kissing Santa Claus."

After recording three instrumental albums featuring her own brand of improvisation and arrangements, Laurie wanted to produce an album for the holidays.

"I knew it was the right decision when Jack agreed to sing on the album," Laurie said.

Palance, who hadn't recorded a song in 30 years, and vowed he would never record a song again, changed his mind after falling in love with Laurie's musical style.

"I love everything about her music," he said. "She is a genius. I love what she does with music."

According to Laurie, Palance breathed new life into the classic poem.

Taken from the article By Carol Holmes, Tehachapi News Editor

HEART OF THE HOLIDAYS AirPlayDirect.com/TheHeartOfTheHolidays

Besides enticing the well-known actor to perform on the Heart of the Holidays album, Laurie Z. has taken warm, familiar holiday melodies and wrapped them in new and intriguing arrangements. Heart of the Holidays is a nice mix of pop, classical, and new age, with a delightful sense of humor. It is a celebration of the season that wells up from deep within, and rings forth in each and every cut on this joyous recording. It is also a showcase for Laurie Z.’s amazing keyboard abilities. Laurie breathes remarkable life and feeling into familiar tunes. Included are creative new interpretations of traditional Chanukah songs "Mo'oz Tsur" and "Sivivon," along with two new original numbers that easily hold their own next to songs we all know by heart. Listeners will walk away humming the melodies of the title tune and "Warmth From Within," which was written for the beautiful album cover oil painting by renowned artist Jesse Anderson.

Topping it all off is Jack Palance's delightful reading of The Night Before Christmas.

For more holiday music or more music by Laurie Z. please visit our other links at AirPlay Direct:

The Music of Laurie Z.
http://AirPlayDirect.com/music/LaurieZ/