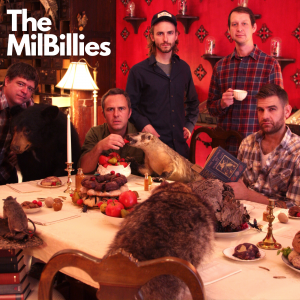 When The MilBillies set out to record their debut album, their goal was to capture the energy and drive of the stage performances that have made them a mainstay of the music scene in and around Milwaukee.

The plan was simple.

The string band’s five members worked with sound engineers at Milwaukee’s Silver City Studios to record the tracks “live,” setting microphones up in a circle to capture the natural sound of the bass, guitar, mandolin, fiddle, banjo and dobro. The vocals were saved until the end. Otherwise, overdubs and re-takes were kept to a minimum.

Rather than a slick studio artifact, the band sought to produce the sort of experience that can be had only when musicians are responding to each other in the moment, picking up on small cues and allowing their music to flow naturally.

The results, evident on every track of this recording, more than justify the approach. The band members went so far toward capturing their essence that they decided to go with the simplest title possible: The MilBillies. With this stripped-down recording, fans who might not have seen the band live can now have essentially the same experience anywhere they want.

But The MilBillies’ ambitions did not stop there. Besides reproducing the feel of a live show, the band wanted to draw further attention to its original songwriting, which has already led to a Wisconsin Area Music Industry (WAMI) nomination in 2020 for New Artist of the Year. Influenced as much by pop and classic rock as bluegrass, The MilBillies’ tunes feature hooks with universal appeal.

The album’s 12 original tracks range from driving breakdowns to bluesy groovers to simple love songs. Their lyrics often pay homage to the city The MilBillies are proud to call home. Snippets of Milwaukee history receive a nod in the tracks “Ol’ Fred” and “Goodland,” while “Hoods” alludes to three local neighborhoods – and the difficulties of finding romance in each. Others, such as “Wild Turkey” and “High Class Low Life,” revel in the good times and raucous atmosphere that are a hallmark of the band’s shows.

Equally noteworthy is the album’s artwork. For this, The MilBillies worked with the contemporary installation artist Jennifer Angus, a professor at UW-Madison, to find an ideal setting for the cover photo. The search took The MilBillies all the way to the Mattress Factory Museum in Pittsburgh, where they found the perfect complement to their music: An exhibit meant to be experienced in-person to accompany a record offering so much of the essence of live performance.

With COVID-19 having shut down most musical venues, The MilBillies’ debut album could hardly come at a better time. Listeners will not only be able to hit play on a recording reproducing the intensity of on-stage shows; they’ll also have a chance to delve into well-written songs that reward repeat listens with clever lyrics, solid musicianship and tuneful hooks that – once heard – will remain with them well into the future.
7
What's This
Advertisement