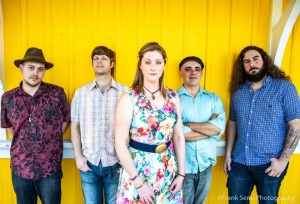 Hailing from the mountain towns of Pennsylvania, West Virginia, and Maryland, The Jakob’s Ferry Stragglers draw freely from Old-Time, Bluegrass, Rockabilly, and Swing music to create their own brand of high energy, Appalachian Bluegrass. Gary Antol (guitar/vocals) and Libby Eddy (fiddle/vocals) founded the band in 2014 with a very simple goal: write good songs, honor the music, and take it to the road. Their music, described as heavy and traditional with stirring harmonies, powerful instrumentation, and progressive originality, has been experienced on festival stages including Delfest, Grey Fox, Delaware Valley Bluegrass Festival, Darrington Bluegrass Festival, and others across the country. JFS was honored to be an Official Showcase Artist at IBMA Bluegrass Ramble 2018.

In 2015, the band released their debut album, The Lane Change, a collection of both original and traditional songs focusing on journeys through personal relationships as well as life in the coal mining towns of central Appalachia. The album was well-received by fans and critics alike.

The summer of 2016 saw two major highlights for the band. In addition to playing The Emerging Artist Showcase at Grey Fox Bluegrass Festival, the band released its sophomore effort, White Lightning Road. The title track, written by Fort Wayne, IN songwriter, Darren Hunt, follows the path of a moonshiner trying to survive in a dying coal town. The song’s soaring vocals showcase Libby Eddy’s uniquely Appalachian voice, steeped in the cultural traditions of her rural West Virginia upbringing, with the strength of a people ready to fight for survival. Hunt also contributed to Ray Steven’s inspired and instantly familiar, “Get Along Gone.” WYEP FM Pittsburgh listed White Lightning Road as one of the top ten bluegrass albums of 2016. WYEP has also featured two of Antol’s compositions on their “Local 913” program: “The Legend of Gandy Grey” (The Lane Change) and “Smokestacks” (White Lightning Road).

In 2018, the band released its third studio effort, Poison River, recorded, mixed, and mastered by Will Shenk at National Media Services in Front Royal, VA. Poison River features original music written by Antol, Eddy, and mandolinist, Ray Bruckman. Along with the addition of Bruckman on mandolin, the album features Jody Mosser, lending his soulful dobro playing to the sound. Appalachian Jamwich’s review of the album called it “pure musical magic.” The album’s lead single “When the Redbud Blooms” received national airplay including a premier on Annette Grady’s The Bluegrass Jamboree.

Moving forward into 2020, the Jakob's Ferry Stragglers are eager and ready to release their first live album into the world, titled "The Straggle is Live". The album is a curation of the group's greatest hits and was recorded live at The Church Recording Studio by Dana Cannone. The set was performed on 10/9/19 with a private, invite-only intimate audience. It was mixed & mastered by Will Shenk at Metier Mastering in Front Royal, VA.

“The Straggle is Live'' started with an idea to capture the animated onstage energy of the band, in a controlled studio environment. It’s not often that a recorded bluegrass album truly matches the sights and sounds of seeing the talent live in-person. The team took this task to heart and has produced an outcome where the at-home listener can truly understand what it means to be at a live Jakob’s Ferry Stragglers show.