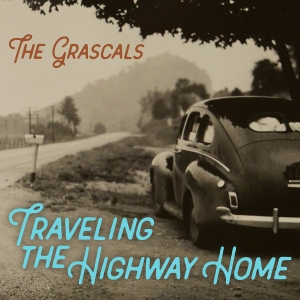 Following “Flowers And Lace,” a radio favorite that showed off their skill with a sentimental, yet contemporary ballad, The Grascals are back with a nod to the hardest of their hard-core bluegrass roots. Featuring a rousing, joyous lead vocal from guitarist Chris Davis and an equally robust harmony from John Bryan (guitar), “Traveling The Highway Home” reaches back not only to iconic bluegrass from the 1970s, but back to country music’s golden era.

Written by the Bailes Brothers and first recorded in 1951 by the legendary Molly O’Day, “Traveling The Highway Home” appeared on the epochal 1977 Ralph Stanley album, Clinch Mountain Gospel, which caught the group during Keith Whitley’s final stint as a Clinch Mountain Boy. Alison Krauss once said, "I can't think of anything better than this record," and it is second in influence to only a handful of classics. The song itself is emblematic enough of the style to have served as the title of a book on Stanley and his music.

“I’ve always loved Ralph Stanley’s gospel music,” Davis says. “And ‘Traveling The Highway Home’ always stood out the most as a favorite of mine. The vocals soaring above their hard driving Bluegrass style was one of the highlights of their music. This is a Grascals take on that effort and I was so thrilled to sing this alongside my bandmate John Bryan, who really gets that high lonesome Bluegrass Gospel sound.”

Indeed, from the high-energy kick-off by Steve Martin Prize recipient and 5-time IBMA Banjo Player of the Year, Kristin Scott Benson, through blazing solos by fiddler Adam Haynes, Danny Roberts (mandolin), Davis and Benson again, this take on a treasured, historic favorite embodies the deep sense of continuity and musical community that have kept The Grascals beloved among the bluegrass faithful even as their more contemporary efforts have won them a broader set of fans. From “Flowers And Lace” to “Traveling The Highway Home” is a long musical distance, but The Grascals have convincingly traversed it once again.

As their records prove, The Grascals’ rare musical empathy gives them an unerring ear for just the right touch to illuminate each offering’s deepest spirit – whether they’re digging into one of their original songs or reworking a bluegrass classic or a pop standard. Take for instance, fan favorite, “Last Train to Clarksville.” Non-bluegrass listeners enjoy a new take on a familiar song, while diehard bluegrass audiences who may have never heard the Monkees classic, respond in-kind, not even realizing that the song has been Grascalized.
24
What's This
Advertisement