The Grascals - Up All Night 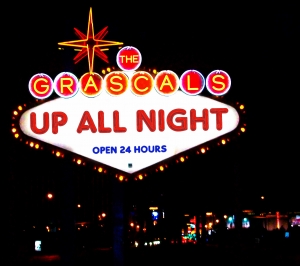 As their touring schedule picks up steam, Three-time GRAMMY®-nominated bluegrass powerhouses, The Grascals, put an exclamation mark on their reemergence with their latest offering of polished yet hard-edged modern bluegrass, Up All Night.

Though the collection is new, the sextet’s followers will find familiar touchstones in four previously-released hit singles that bookend the set: the nostalgic recollection of “Sleepy Little Town,” sentimental favorites “Flowers And Lace” and “Thankful,” and the bluegrass gospel classic, “Traveling The Highway Home.” In between, listeners will find another eight songs that fill in the portrait of a group at the height of their powers, blending soulful ballads, energetic traditional bluegrass, gospel songs and an outlook that centers on family, faith and the old home place.

For The Grascals, that approach has been the key to enduring success for more than 15 years — success that’s encompassed recognition with two IBMA Entertainer of the Year awards, appearances on prime-time and late-night TV shows and command performances for two presidents, not to mention those GRAMMY® nominations. Yet even as they offer a coherent attitude toward life, the group incorporates a wide range of sounds and styles, balancing a powerhouse vocal trio comprised of guitarists Chris Davis and John Bryan — that’s the former out front on “Traveling The Highway Home,” “Sleepy Little Town” and the title track, among others, while the latter takes the lead on songs like “Thankful,” “Flowers And Lace” and the mountain-flavored “Maybelle” — alongside bassist Terry Smith with virtuosic yet always supportive picking from master mandolinist Danny Roberts, fiddler Adam Haynes and five-time IBMA Banjo Player of the Year Kristin Scott Benson.

On Up All Night, that musical one-two punch delivers a group of songs supplied by some of the music’s most successful writers, including Milan Miller (“Maybelle”), Rick Lang (“Thankful” and “Low Down Blues”), Ray Edwards (“Where My Darlin’ Waits For Me,” “This Ol’ Train”) and Jon Weisberger (“Up All Night” and “You Put Me First,” the latter co-written with Blue Highway’s Shawn Lane). There’s even room for a signature instrumental, Roberts’ “It’s A String Thing,” that gives the pickers a turn out front — one that, not surprisingly, they take full advantage of.

As they leave the 15th anniversary of their founding behind and look toward the 20th, The Grascals can truthfully say they have the best of both worlds — the steadiness of a veteran group that knows who they are and where they’re going, and the excitement and energy of an ensemble that knows it has something to prove, and the confidence to know they’ll more than meet the challenge. With Up All Night, they’re serving notice that they’re ready to go.

As their records prove, The Grascals’ rare musical empathy gives them an unerring ear for just the right touch to illuminate each offering’s deepest spirit – whether they’re digging into one of their original songs or reworking a bluegrass classic or a pop standard. Take for instance, fan favorite, “Last Train to Clarksville.” Non-bluegrass listeners enjoy a new take on a familiar song, while diehard bluegrass audiences who may have never heard the Monkees classic, respond in-kind, not even realizing that the song has been Grascalized.