The Caleb Daugherty Band "Where Does A Hobo Go" 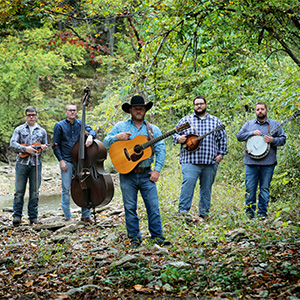 
Bringing together the meaningful lyrics of country music with the traditional musicianship of bluegrass, The Caleb Daugherty Band has emerged as one of the most promising live acts on the acoustic festival scene. Blessed with an expressive and resonant baritone voice, Daugherty carries on the legacy of heroes like Merle Haggard and George Jones as a singer, while the band as a whole draws inspiration from famed bluegrass groups such as Seldom Scene and Lonesome River Band.

With its message of hard work and simple living, every member of the group can easily relate to their newest single, “Daylight’s Burning” -- and they believe their listeners will, too. “I was pretty much raised that way, so to me, I can connect with it,” Daugherty says. “I was raised on a farm with 40 acres and we always had cows, horses, and chickens, and always had some kind of work to be done. To me, it’s a happy song and it makes people think about when times were a little more simple.”

Born and raised near Connersville, Indiana, Daugherty still calls it home. Today he lives on an acreage with his wife and family about 10 minutes outside of the small town. The remaining band members, who also live in Indiana, include Zion Napier on mandolin, Kyle Clerkin on banjo, Zach Collier on bass, and Kyle Ramey on fiddle.

Born in 1992, Daugherty grew up surrounded by music. His mother’s grandfather, who attended church with the family, played guitar and sang. Meanwhile his father’s father, who lived about six hours away, introduced him to classic country during summer visits. Daugherty’s father, a longtime musician and rhythm guitarist, brought him into the family band at an early age. After playing bass (while having to stand on top of a milk crate), Daugherty gravitated toward the guitar around age 7. His father showed him a few chords on an Applause model and promised to give him a Martin guitar if he improved.

“Then it was on from there, buddy,” Daugherty recalls, laughing. “I was doing everything I could to get better. I spent most every night laying in my bed, a lot of times with the lights out. That way I couldn’t really see what I was doing, so I had to feel it and hear it. I’d sit and play that guitar forever -- and finally I got a Martin.”

Because he grew up performing in church, Caleb predominantly played gospel songs until he turned 18. During a visit to Nashville in 2012, he attended a concert by Lonesome River Band and IIIrd Tyme Out, which set him on a path toward forming his own band. Bluegrass star Rhonda Vincent, who befriended the band after seeing their set at Silver Dollar City in Branson, invited him to play guitar in her band for a Grand Ole Opry performance. He’s also taken part in an all-star tribute to Keith Whitley in Nashville.


Daugherty offered a self-titled country album in 2017. Upon the release of Burnt the Sawmill Down in 2019 (an album of classic country covers that features a duet with Vincent), Bluegrass Today noted, “Caleb Daugherty represents the real deal, an artist whose efforts exude a confidence and clarity that extend well beyond his tender years.”

In the latter part of 2020, Caleb had the honor of being asked to be included on a historical project produced by Joe Mullins (Joe Mullins & The Radio Ramblers) and released on Smithsonian Folkways Recordings. The Album “Industrial Strength Bluegrass” is a compilation album that includes some of the biggest names in the Bluegrass world and would feature Caleb Daugherty & Rhonda Vincent on Track #8 “Family Reunion”. Family reunion would be the 2nd single released on the album in early March 2021. The full album was released on March 26, 2021.

Since the release of that project, the profile of The Caleb Daugherty Band has continued to rise, especially on the festival scene. Each member of the band draws on his own bluegrass roots as well.

Zion Napier, of Scipio, Indiana, is the oldest of four brothers and grew up playing guitar, fiddle, and mandolin in family bluegrass-gospel groups. Daugherty credits Napier for having the ability to not only write songs, but to find lesser-known material that suits the band.
Kyle Clerkin, of Madison, Indiana, discovered bluegrass through the Ricky Skaggs classic, “Highway 40 Blues,” as well as a Flatt & Scruggs box set given to him by a friend. He and his wife welcomed their second child this year.

Zach Collier, of Indianapolis, has been playing bass for nearly a decade – and he started at age 13, with encouragement from his dad. Daugherty cites Collier as a solid player who never holds back when he hears room for improvement.
Meanwhile, Kyle Ramey, of North Vernon, Indiana, started performing at festivals as a kid and has appeared on the Opry stage as a sideman with numerous bluegrass stars, including Alison Krauss and Larry Sparks. At one point, Daugherty, Napier, Clerkin, and Ramey all played with the regional band The New Balance.

A true ensemble, each member of The Caleb Daugherty Band now offers input on arrangements, material, and the overall creative vision. “I don’t know what it is about us together. I guess it’s because everybody is so different, yet so alike at the same time, that it just blends very well,” Daugherty says.