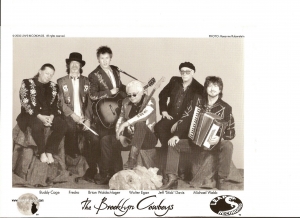 The Brooklyn Cowboys came together when Fredro met Walter Egan at a rock n roll jam session in Brooklyn, New York in 1996. The two hit it off immediately on a personal and musical level. Walter was well known for his million selling top ten hit, "Magnet and Steel", produced by Lindsay Buckingham and featuring Stevie Nicks on background vocals, but after playing together for several months, Walter let it be known that he had written the Gram Parsons' classic, "Hearts on Fire". Fredro was stunned when he heard this for two reasons. First, with his encyclopedia-like knowledge of music and music history, he had not known this. Second, Walter had waited so long to tell him.
Fredro immediately suggested that they start recording some country songs he had written. The name Brooklyn Cowboys popped into Fredro's head when the engineer on those early sessions asked what name to put on the master tapes. The sessions went so well that they decided to keep it going. Recruiting former (and current) pedal steel ace, Buddy Cage, from The New Riders of the Purple Sage, and two longtime musical cohorts on bass and rhythm guitar, the newly formed band started barnstorming the northeast.
Things were going great, but after a year Walter decided that Nashville was where he should be. Not wanting to give up on such a promising group, Fredro, and later Buddy, started commuting. Hooking up with Nashville friends, Supe Granda (Ozark Mountain Daredevils), Joy Lynne White, and session ace Michael Webb on keyboards, a new band was born, and, with the help of producer Al Perkins, recorded The Brooklyn Cowboys first CD, "Doin' Time on Planet Earth, released on April 20, 2000.
The CD was an instant sensation for several reasons. The all-star lineup, which included guests Vassar Clements on fiddle, former Merle Haggard guitarist, Redd Volkaert (The Master of the Telecaster), and Knoxville's favorite son, Brian Waldschlager, got them noticed. The great songs and traditional instrumentation didn't hurt. The band's version of "Hearts on Fire" (which producer and former Burrito Brother Al Perkins dubbed as "better than Gram and Emmy Lou", and folks, he was on the original session) helped. But the main reason the band's inboxes exploded, even before the CD was released, was the inclusion of "Carolina Calypso", a never before released song written by Gram Parsons and Walter Egan.
"Doin' Time on Planet Earth" spent 5 months on the Gavin Americana chart, peaking at #12. It also hit #9 on the Freeform American Roots (F.A.R.) chart, produced 3 European top ten singles, received airplay in over 40 countries around the world, and was a top ten seller at Miles of Music for 3 straight months. At year's end, it was proclaimed the #1 CD of the year in Belgium and Holland, #2 in Alaska, and #8 in Germany.
The band followed the release of their CD with a whirlwind of touring that took them all over the U.S. and to Europe. When they had time for a break, they went back into the studio to record their second CD, "Dodging Bullets", released in September, 2002, and featuring a guest appearance from longtime Johnny Cash bassist, Dave Roe. The CD spent 4 months on the Americana chart, peaking at #27. In 2 short months it became the #10 seller for the year 2002 at Redeye Distribution, the band's distributor. When the first European single from "Dodging Bullets" was released, the previous CD was still receiving airplay in Europe, but this did not prevent 3 singles from the new CD from reaching the top 5 on European Country charts. At the end of the year, the band was once again honored with the #1 CD of the year in Belgium.
At one time or another, members of The Brooklyn Cowboys have included members of The Amazing Rhythm Aces, New Riders of the Purple Sage, Ozark Mountain Daredevils, Spirit, BR-549, Roger Miller's band, Al Green's band, Bob Dylan's recording band, Pam Tillis' touring band, The Ex-Husbands, Allison Moorer's band, Stacey Earle's band, Pin monkey, Shinola, Pure Prairie League, Gary Allan's touring band, and B.J.Thomas' touring band, but the lineup has solidified to the members listed above.
The band is currently working on preparing for release a live CD recorded in LA on their last tour of America.
25
What's This
Advertisement