The Boxmasters - Somewhere Down The Road 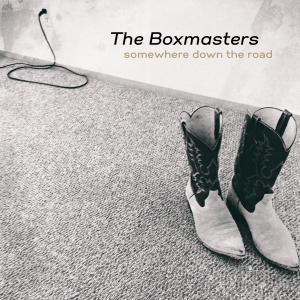 The Boxmasters are made up of Bud Thornton (vocals and drums), J.D. Andrew (guitar, bass and vocals), Brad Davis (guitar) and Teddy Andreadis (keyboards.) After forming in 2007, the band released their self titled debut, “The Boxmasters” to critical acclaim in 2008, a two CD set comprised of one full set of original songs, including the Americana Radio hit “The Poor House”, and one disc of eclectic cover songs, with covers of tunes by The Beatles, The Nitty Gritty Dirt Band, Mott The Hoople and Mel Tillis. They followed it up with a tour that found them opening for themselves. Later in the year, The Boxmasters released a Christmas album, “Christmas Cheer”, and by April of 2009, they had released their third album in less than a year. “Modbilly” was yet another double album offering that spent 2 weeks at the top of the Americana charts and ended up at #14 on the 2009 Americana Music Association’s Top 100 Albums of The Year.


• The Boxmasters have released 3 albums on Vanguard Records. “The Boxmasters”, “Christmas Cheer”, and “Modbilly”
• Television appearances include performances on:
o “The Late, Late Show with Craig Ferguson”
o “Jimmy Kimmel Live”
o “Live with Regis & Kelly”
• “Modbilly” reached #1 on the Americana Radio Chart for 2 weeks in 2009 and was #14 on the Americana Music Association’s Top 100 Albums of the Year
• The Boxmasters contributed a cover of “Sylvia’s Mother” to the compilation “Twistable Turnable Man- A Tribute to Shel Silverstein”
• “I’ll Give You a Ring” is featured in the film “The Winning Season” starring Sam Rockwell on Lionsgate Films
• The Boxmasters contributed a version of “Little Boxes”, the theme song for the Showtime comedy “Weeds” second season.
• Past performance highlights include:
o Tony LaRussa’s Animal Rescue Foundation’s Benefit in 2009 & 2011
o Hosting/Performing for The Country Music Hall of Fame’s “All For The Hall” Benefit in New York City in 2008
o Levon Helm’s Midnight Ramble twice as well as Levon’s concert “Ramble at The Ryman”
o A sold out night at Billy Bob’s in Fort Worth, Texas where ZZ Top was the opening act
o Toured as opening act for Willie Nelson and Family and Ray Price
o Performed a “Virtual Concert” at Michael Nesmith’s Video Ranch
o The Harley Davidson “Hog Rally” in Milwaukee, Wisconsin
o BMI Showcase at The Sundance Music Festival
o Performed at SXSW many times
• The Boxmasters are very good bowlers. They famously defeated Def Leppard in Grand Rapids, Michigan

Teddy Andreadis
• Has shared the stage with the likes of Guns N Roses, Carole King, Alice Cooper, Chuck Berry, Bo Diddley, B.B. King and many others.
• A long-time counselor and mentor at Rock and Roll Fantasy camps.
• Released solo album “Innocent Loser” in 2012
J.D. Andrew
• Grammy Award winning recording engineer whose credits include The Rolling Stones, Kanye West, The Pussycat Dolls, Will Kimbrough, Tommy Womack, Guy Clark and more.
• Co-founded The Boxmasters in 2007.
Brad Davis
• Grammy Award winning Producer and Musician who has worked with the likes of Tommy Shaw, Marty Stuart, Earl Scruggs, David Lee Roth, Dwight Yoakum, Sheryl Crow, Merle Haggard, John Jorgenson, Sam Bush and many many more.
• Widely known in flat-picking circles for his double-down-up picking technique.
• Has released multiple albums including “Not Gonna Let My Blues Bring Me Down”, “Walk On Faith”, “This World Ain’t No Child” and many more.
Bud Thornton
• Has 4 solo albums “Private Radio”, “Edge Of The World”, “Hobo”, and “Beautiful Door”
• Has performed on numerous recordings such as Warren Zevon’s GRAMMY winning album The Wind, the legendary Earl Scruggs’, Earl Scruggs and Friends and Anchored In Love: A Tribute to June Carter Cash.
• Was a roadie for bands in the 70’s such as Johnny Paycheck, Pure Prairie League and The Nitty Gritty Dirt Band.