Terry Hanck - I Still Get Excited 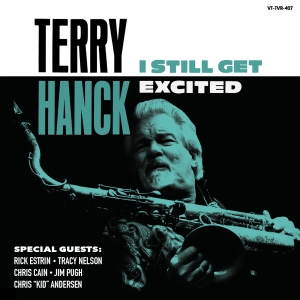 Three-time Blues Music Award winner, Terry Hanck is in the modern pantheon of tenor sax greats. His sound is at the nexus of classic New Orleans R&B, Chicago blues and soul, West Coast honk and Memphis rock and roll. The guy has a voice that still make women swoon. His lyrics are ranked among the best in his idiom. Terry’s five originals stand shoulder-to-shoulder with some of his hand-picked favorites by Louis Jordan, Sam “Lightning” Hopkins, Bobby Charles, Eddie “Cleanhead” Vinson and Howling Wolf.
For I STILL GET EXCITED, Co-produced with renowned player/producer savant, Chris “Kid” Andersen at Greaseland Studios in San Jose, the “silver-haired fox” gathered some famous special friends—including harpman Rick Estrin, piano/organ man Jimmy Pugh, guitar master Chris Cain, drummer June Core and the legendary singer Tracy Nelson—to join in with his own brilliant bandmates for one of the best albums of his long career. A perfect summer record for dancing, driving and being young at heart!