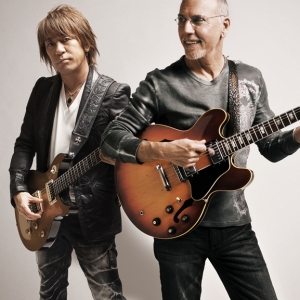 The pairing of modern Eastern and Western guitar styles
delivers a collection of music unlike any other.

Larry Carlton
Eighteen-time Grammy nominee, three-time Grammy winner and all-time guitar great, Larry Carlton established himself from his first recording, A Little Help From My Friends. His studio credits include musicians and groups like Steely Dan, Joni Mitchell, Michael Jackson, Sammy Davis Jr., Herb Alpert, Quincy Jones, Bobby Bland, Dolly Parton, Linda Ronstadt and literally dozens of others. He went on to perform with the Crusaders and then with the multi platinum jazz super group Fourplay. With 30 albums to his credit and
having performed on over 100 albums that have gone Gold or Platinum, Larry Carlton has set a standard for artistry that spans three decades. In 2008 Larry Carlton received a Lifetime Achievement Award from Guitar Player magazine at the historical Ryman Auditorium and was presented the "Titan of Tone" award from Premier Guitar Magazine at the Rock and Roll Hall of Fame.

“It must have taken more than one lifetime of music to produce Larry Carlton, he is the sum and son of a long lineage, beyond time, and beyond rational explanations of dedication or practice, the work of his hands speaks grace and passion and timeless knowledge.
Listen, learn and be profoundly moved.” - Sting.

"If Royal Scam is the definitive Steely Dan guitar album, then Larry Carlton is the reason why." - Walter Becker

Tak Masumoto
Championed in his homeland as the most renowned guitarist in all of Asia, Tak Matsumoto is equally revered as chief songwriter, guitarist and producer of the Japanese rock band, B'z. Counting a legacy of 12 albums, B'z truly means big business, having sold a combined 80 million units in Japan alone, not surprisingly making them Japan's bestselling band in history. 2002, in particular, served as a landmark year for Tak with the Japanese release of his much heralded instrumental albums, Hana and "Dragon From The West". Hana, most noticeably, garnered rave reviews, its powerfully flowing melodies evocative of scenic horizons of the Orient. The album's bonus track, "Trinity," finds Tak stretching the boundaries of "rock" guitar, blending different tastes in the melodies while retaining the same distinctive Japanese spirit. Instrumental Guitar (Electric (Heavy)/Rock/World). In 1999 he was given his own Signature Model Les Paul by Gibson and was added to Gibson’s signature artist club. He is the only guitarist from Asia to be added to the club.