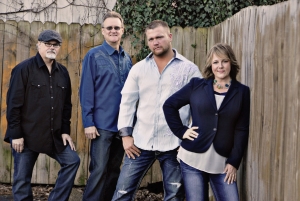 The unique and entertaining musical journey of The Expedition Show blends tight vocal harmonies, white-hot picking, and side-splitting humor into a fast-paced, non-stop, crowd-pleasing show! One of the fantastic surprises of this veteran group of musicians is the original songs and fresh sounds combined with old-school traditional spirit. Critically acclaimed master musicians and singers trained by the forefathers of bluegrass and the legends of the Grand Ole Opry have forged into a very special musical experience!

Consisting of Blake Williams on banjo and vocals; Wayne Southards on guitar and vocals; Kimberly Williams on bass and vocals; and Alex Hibbitts on mandolin and vocals; The Expedition Show has been a fan and festival favorite since their beginning in early 2002. During the band's 9 year tenure, the entertaining group has been nominated twice by the International Bluegrass Music Association (IBMA) for Emerging Artist of the Year (2005 and 2007), Wayne Southards has won the International Acoustic Music Association's Male Vocalist of the Year award (2009) and Blake Williams has been nominated three times for Entertainer of the Year by the Society for the Preservation of Bluegrass Music of America (2007-2009). The band has performed all over the world including a tour with country music artist Darryl Worley to Japan and an extensive headlining tour in Canada. In addition, the band was invited to perform for the historic Ryman Auditorium's "Bluegrass Nights at The Ryman" concert series in 2007 where they played to a nearly sold out crowd. In between all the touring, the quartet has also released eight full-length CDs.

"When we started this band, we wanted to be different from anyone else out there," states founding member Blake Wil- liams. "With Wayne and Kimberly both singing lead and harmony, we immediately offer a variety for the listeners and we also write a lot of our own songs. And another thing we wanted to do was to put on an entertaining show. When I worked with Lester Flatt back in the 70's, he made a point to call his performances a ‘show’. Every time he stepped on stage, he set out to entertain and not just perform but give that audience a ‘show’ and I learned very early on that if you can entertain a crowd, not just play to them, then you've done what you're supposed to do when you’re on stage."

And entertain is exactly what The Expedition Show does. They not only present excellent vocals from solos to quartets, and excellent musicianship from the veteran players, but they also engage the crowd in laughter with the banter between Expedition band members and the country comedic style of Williams. "I've always thought if people were laughing, they're forgetting their troubles," continues Williams. "If you aren't smiling or laughing throughout our show, then we're not doing our job as entertainers."