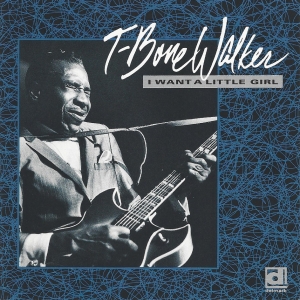 T-Bone Walker is indisputably one of the most influential figures in modern blues, as well as a long-respected musician in the jazz world. Listen to B.B. King, Chuck Berry, Pee Wee Crayton, Otis Rush, or any of dozens of other blues/R&B guitarists, and you can discern an unmistakable T-Bone Walker tinge.

The first impression made here is surprisingly not from the master's guitar, but from his vocal, the song itself more of a doo **** ballad than a gutbucket blues. The only kind of T-Bone still savored by European blues fans since the mad cow disease scare barely plays guitar at all as the song begins to unfold, casually wrapping his lips around the lines like a saloon singer with a couple of shots under his belt. But when the instrumental section starts and he begins playing guitar, that's when the listener knows for sure this isn't a Johnny Hartman record. I Want a Little Girl was originally recorded in the late '60s for release on another label, and is in some ways like some of the sides Hartman created for Impulse with small combos backing him, sometimes even featuring guitarists, although never with the edge exhibited by Walker. That is not to say that the knives and swords brandished by the king of the Texas guitarists here are his sharpest and deadliest. The fact is, this is a relatively laid-back session to the point where the comparison to a smooth crooner such as Hartman becomes no joke, as the second side cuddles in with a version of "Gee Baby, Ain't I Good to You" that is probably more delightful than what Hartman himself might have made of the number. The band is tight yet laid-back and never pushy, with a tenor saxophonist and pianist who like to get adventurous in their solos, referencing various jazz points of departure. Tenorman Hal Singer serves something of a full-course meal on his "Feeling the Blues" break. The first musician one notices will inevitably be the drummer, S.P. Leary, whose ability to set the proper rhythmic tone as well as control the group's dynamics is evident from the first moments of the title track. He plays superbly throughout the entire record. Bassist Jackie Samson works perfectly with both the drummer and the pianist, while the leader himself seems to assume the role of a kind benefactor. It is an image that might work at odds with the notion of a bandleader in sharp control of the happenings. T-Bone Walker is just that, however. The notion is enforced every time he lays down the law with the sudden entrance of chopped chordal patterns, or sets a new number up with a riff that will later become the essence of his guitar solo. The tone of his instrument itself has been better and fans of the guitarist may even rate parts of his work here as chopped steak in comparison with other T-Bones that have been served.
6
What's This
Advertisement