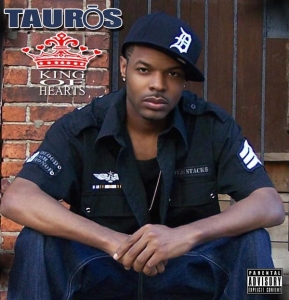 Introducing....
T A U R O S
The swag of a rapper
The soul of a ladies man
The passion of a true musician
Tauros is a multi talented singer, songwriter and producer. He is considered one of the hottest 1 man shows around. Tauros speaks highly of his major influences Prince and Michael Jackson with a big grin on his face. You can see through his stage presence and interaction with his audience just how much he has learned from the greats. Maintaining a good reputation for being easy to work with, Tauros is eager to connect as much as possible with industry and fans alike. Calling myspace friends and singing on their voicemails is unheard of in this velvet rope business but Tauros is anxious to try every new model or platform. You can find his music spread all across the internet. The release of his brand new cd will be the talk of 2009. There are so many stand out singles on his new album "King Of Hearts" but key tracks are "Cutty Buddy, the heart wrenching "Hero", that club banger "Turn It" , the ever so sweet "LIKE U"and the unreleased "Wit Yo Gurl" produced and written by Tauros. Catch one of his shows and get your proof.
Expect to hear a lot more from Tauros this year as he set to release his remix album "KOH II" which translated means "King Of Hearts 2".
0
What's This
Advertisement