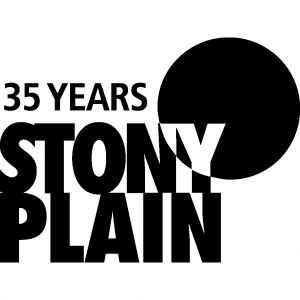 Note: This is Disc 1 of our 35 Years of Stony Plain compilation. To listen to Disc 2, visit:
http://airplaydirect.com/music/StonyPlainRecords2/

Stony Plain Records proudly announces the May 10 release of a special 3-disc set to celebrate its 35th anniversary. Titled simply 35 Years of Stony Plain, the set includes 41 tracks on two CDs, plus a bonus DVD of 11 videos featuring such artists as Jeff Healey, Jay McShann and Johnnie Johnson, Ronnie Earl & the Broadcasters, Duke Robillard, Corb Lund, Ian Tyson, Downchild and Long John Baldry. The DVD also includes a tour of Stony Plain's offices in Edmonton, Alberta. 35 Years of Stony Plain is a specially-priced set with extensive liner notes and annotations of each track. Stony Plain Records is distributed in the U.S. by ADA, in Canada by Warner Music Canada, and in Europe by CRS.
The music on the two audio discs includes eight previously unreleased tracks, featuring four by legendary bluesman Robert Nighthawk, recorded at a Toronto session in 1965; one track from Canadian blues pioneer King Biscuit Boy; and three tunes by the late songwriter, Bob Carpenter, whose songs were recorded by such artists as Billy Joe Shaver and Tom Rush. Other tracks of note include advance previews of songs from the upcoming albums by Harry Manx and Kevin Breit and Kenny "Blues Boss" Wayne; plus rare tracks from Steve Earle, Emmylou Harris, Rodney Crowell, Asleep at the Wheel and many more. The core of Stony Plain's current roster is well-represented with material from Duke Robillard, Maria Muldaur, Rory Block, Ian Tyson, Joe Louis Walker and Ronnie Earl & the Broadcasters.
The bonus DVD includes some real treasures for music fans. Toronto filmmaker Mako Funasaka created a special tribute to Jeff Healey by melding video of Jeff performing with guests from Kim Wilson to Downchild's Donnie Walsh and Deep Purple's Ian Gillan, plus some rare in-studio footage, all set to Jeff's version of Neil Young's classic "Like a Hurricane," as the soundtrack. Another archival video gem is the meeting of blues, boogie and swing piano titans Jay McShann and Johnnie Johnson performing "Going to Kansas City," shot in 2001 during the "two piano only" session recorded in Kansas City and released on the Grammy-nominated McShann CD, Goin' to Kansas City.
Established in 1976 by Holger Petersen and Alvin Jahns, Stony Plain Records has released almost 400 albums of blues, classic R&B, folk, country, bluegrass, rock and roll, and music that is impossible to put into pigeonholes. The common element in all of these forms of music is that the musicians, regardless of current fad or fashion, put their hearts and souls into the music they make. Stony Plain released the results - and almost invariably found that people responded.
Holger Petersen remains a self-confessed music junkie, but in addition to his day-to-day work with the label, gives his time generously to music industry organizations. Along the way, he helped found the Edmonton Folk Music Festival (and was its artistic director for three years), and was a founding member of Alberta Music.
Stony Plain has received six Grammy Award nominations for its artists, including Maria Muldaur, Jay McShann and Duke Robillard. The label and its artists have also garnered numerous awards from the Blues Foundation, ten Juno Awards, Canadian Country Music Association Awards, Maple Blues Awards and Western Canadian Music Awards. And on a personal level, Petersen was honored for his contributions to Canadian arts and culture with an honorary Doctorate from Athabasca University in 2002 and was awarded the country's highest honor, membership in the Order of Canada, in 2003.
All that said, Petersen's much better known in Canada for hosting "Saturday Night Blues," CBC Radio's only long-running national blues show, on the air for 25 years. In addition, he hosts a weekly show called "Natch'l Blues," on CKUA Radio Network in Alberta and programs the "BluesTime" channel on Canada's Galaxie Satellite Network.
Today, 35 years on, Stony Plain has built a remarkable reputation. The late Jerry Wexler, the great producer and one of the founders of Atlantic Records, praised Stony Plain as "an independent company, an endangered species in a dangerous world - and a source of wonderful music."
Advertisement