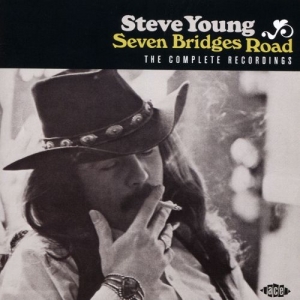 Steve Young is probably best known as a writer, especially for his song Seven Bridges Road recorded by the Eagles. Steve was also an incredibly soulful singer, but his mixture of blues, country, rock and gospel never found the larger audiences he deserved. He was an Americana artist before the term was used for a genre. He was too country for rock and too rocky for country and is now viewed as a pioneer in the development of country rock. Steve’s song Lonesome On’ry and Mean, included here, was covered by Waylon Jennings and became an anthem of the outlaw movement.

Young says, “I gave this song away to Waylon, he used this song almost like his image back in the macho country rock days, but ironically it’s about trying to give up alcohol, and wondering if you could still play.”

Steve Young was inspired to write "Seven Bridges Road" during a sojourn in Montgomery, Alabama, in the early 1960s: according to Young "a group of friends...showed me [a] road [that] led out of town...After you had crossed seven bridges you found yourself out in the country on a dirt road. Spanish moss hung in the trees and there were old farms with old fences and graveyards and churches and streams. A high-bank dirt road with trees. It seemed like a Disney fantasy at times. People went there to park or get stoned or just to get away from it all. I thought my friends had made up the name 'Seven Bridges Road'. I found out later that it had been called by that name for over a hundred years. "

Steve Young Biography
Steve Young was a soulful singer/songwriter who grew up throughout the south absorbing the sounds he heard into an intense mix of blues, country, gospel and folk. He first recorded Seven Bridges Road in 1969 but it was the Eagles live version which brought the song greater attention and it is their version that is most familiar to most people. Steve’s version here will hopefully introduce many to one of the great singers and writers of the early years of country rock and still hold up today as a stunning representation of a great American artist.

What distinguishes Steve Young's classic Seven Bridges Road -- a follow-up to the well-received A&M album Rock Salt and Nails -- is the appearance of Young's signature tunes: the title track; "Lonesome, On'ry & Mean," which was a smash for Waylon Jennings as an outlaw anthem and established Young as a songwriter for many other country stars; and the melodic jeremiad "Montgomery in the Rain." Seven Bridges Road is also the most purely "country" record Young ever issued. There is no rock & roll on this set, and there aren't any folk songs either. It's pretty much a honky tonk record in the Merle Haggard vein, with a voice equally influenced by the West Coast folk-rock sound. Nashville's session cats -- including Pete Drake on pedal steel, fiddle ace Buddy Spicher, harmonica player Charlie McCoy, Elvis sideman D.J. Fontana, producer and pianist David Briggs, and more than a dozen others -- contributed to the album.

All but three tracks were written or co-written by Young; of the covers, his read of Haggard's "I Can't Hold Myself in Line" is a stunner. On the humorous side, "The White Trash Song" -- performed with the Last Mile Ramblers -- is a stomping electric bluegrass number that hints at the more rockist direction Young would be heading in on future recordings. But it is on the three bona fide classics that we encounter a fully developed Young, not only as a songwriter, but as a singer. In particular, "Seven Bridges Road" and "Montgomery in the Rain" offer a writer who has taken everyone from Thomas Wolfe to Hank Williams and turned them into something completely his own: prosaic, profound, and scathingly original. This is a bona fide masterpiece. [A Chinese version was also released.]
25
What's This
Advertisement