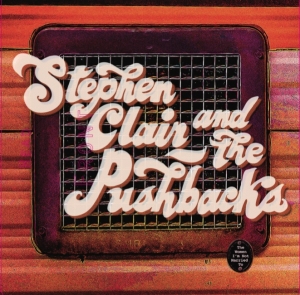 “Stephen Clair and the Pushbacks have literary, story-telling songs like Chuck Prophet, with a range of
feeling from Steve Forbert to Alejandro Escovedo.”
Nan Warshaw, Bloodshot Records

“For fans of literate singer-songwriters who balance the weight of the world with a bit of humor ...”
All Music Guide


Stephen Clair was raised in the upstate-New York shadow of
Woodstock, but his musical heart first quickened, at age 4, to the sound of Johnny Cash. Once a guitar landed in his 11-year-old hands, he knew his destiny. Soon, that heart of his would beat for offbeat troubadours Tom Waits and John Prine, and fall for Tom Petty and Richard Thompson. Music became as important as breathing; writing came just as naturally.
Learning his craft took him to Austin, New Orleans, San Francisco, New York City and even the literature- and history-steeped south of France, before drawing him back upstate to Beacon, New York.

There, he helped turn a small working-class town into a lively hive of creative activity while recording a string of solo albums that span the wide spectrum of rock ‘n’ pop — or rockin’ pop — mixed with a punk-edged attitude, a little bit o’ soul, some jazz-blues and a cleverly subtle wit. With his band, the Pushbacks, he’s kicked it all up a notch, as evidenced on their self-titled, asterisk-free album, Stephen Clair and the Pushbacks, releasing January 26, 2018.

Comprised mainly of faculty members at Beacon Music Factory, the school and band boot camp Clair founded, the Pushbacks augment his guitar and vocals with keyboards, horns and harmonies, among other sounds. As for those vocals, Clair’s distinctive voice has been compared variously to Chuck Prophet, Ray Davies and James McMurtry.
He uses it to full effect on the opening track, “My Crime,” which has the snaky, minor-key feel of a murder ballad, but winds up sounding more like a dysfunctional love song — one with the memorable line, We passed rye whiskey around in the van/it felt good to drive, but hell if I could stand.

Clair shows his vocal versatility in the higher-register delivery of “Drag,” which contains lyrics like I couldn’t tell you now if it was a pick-up line that could save me from myself.

Prophet could have written “Take It Downtown,” which drips with a sinister tone and pop-culture references, and contains a beautifully layered bridge that’s musically complex, yet still accessible.

“Typing Tipsy” couples pop-punk cheek with a groovy beat, Elvis Costello-style, then surprises with a high-flying flutter of horn notes before coming down again. The eight-track release wraps with “Kill Me,” an infectiously melodic song about the downs and ups of a music career — one the singer loves so much, he half-ponders whether it’s time to check out so he can end life on a high note.

The song’s twists point to Clair’s ability to marry surprising lyrics and inventive sonic patterns within a pop framework—a trait that makes his music even more exciting. Legendary WFUV-FM music director Rita Houston is a fan; so is Robert Earl Keen, who took Clair on tour, then accompanied him on his 2008 album, What Luck. Keen’s longtime guitarist, Rich Brotherton, who produced the album, calls Clair “an incredible singer-songwriter.”

On the Beacon Music Factory website, Clair writes, “I think everyone deserves to make some music, because making music will lift you up to the rafters.” And making the kind of music contained on Stephen Clair and the Pushbacks — music rooted in a time when, as he puts it, “radio could save your life and a song was all you needed” — lifts listeners up, too.

Stephen Clair Fables: (The Adventures Of The Lady In The Painting, The Chicken Farmer, Long Jump
& My Understanding)
https://www.stephenclair.com/pageit/

For further information regarding Stephen Clair and the Pushbacks please contact Jo Rae Di Menno at
512.554.2799 and at jorae@hardpressedpublicity.com.
Jo
1
What's This
Advertisement