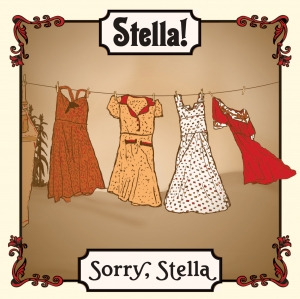 Stella!, a four-piece, all-women, American roots band from Detroit, Michigan, has been referred to as a singer-songwriter super group with three-part vocal harmonies and four songwriter voices. Stella! was first conceived of by singer-songwriter Jo Serrapere after a conversation with American music critic and Creem Magazine co-founder Dave Marsh. Jo was inspired to put together a new group where she could specifically showcase her country-roots songwriting.

Eclectic writer Jo Serrapere, who credits songwriter Tom Waits, early blues, jazz and old-time, as her strongest influences, was the founding member of the old-time string band, Uncle Earl. She has had two appearances on National Public Radio's "A Prairie Home Companion" and three albums with her band, Jo Serrapere and the Willie Dunns, including her recent release, "Love Going South." This CD held the #1 position for two months on the Freeform American Roots Chart in fall of 2009 and was listed in their top 10 albums of 2009. Jo asked songwriter and multi-instrumentalist, Jen Sygit to join Stella! and be another songwriting voice in the group. Jens voice adds deep blues tones to Stella! She plays acoustic and electric guitar, banjo, dobro and ukelele. Jen has three solo albums to her credit, including her new release, "So Long Pollyanna." Her previous album, "Leaving Marshall Street" was nominated for a 2007 Detroit Music Award and charted at #9 on the Freeform American Roots Chart.

Fiddler, songwriter, and classical violist, Diana Ladio joined Stella in the beginning of 2010. Recently graduated from the University Of Michigan School Of Music, Diana began touring on the front lines of the Chelsea House Orchestra in Chelsea, Michigan. She went on to co-found the Celtic Fusion duo, String Cheese, who recently performed as soloists with the Battle Creek Symphony. She brings classical, Celtic and old-time fiddle, original fiddle compositions and occasionally a fourth harmony to Stella!

In the Fall of 2010 Stella! completed its line-up with singer-songwriter and multi-instrumentalist, Laura Ann Bates. Although university trained in operatic voice, piano and flute, Laura has taken on the upright bass. By pursuing opera in the classroom by day, bluegrass and folk in the bars at night, hymns and choral pieces on Sunday morning, she has developed a very diverse musical pallet. In 2007 Laura released a CD with songwriter Brandon Foote called "Jubilee." She also performs with the Lansing Vaudeville Troupe "The Little Darlin's."

In 2010 Jo and Jen traveled to New York City under the sponsorship of Marsh, and recorded their album in two days. "Sorry, Stella" was produced by Detroiter Adam Druckman and by Larry Eagle, percussionist for the Bruce Springsteen's Seeger Sessions recording and tour and the Andy Statman Trio. Fiddler Tahmineh Gueramy, bassist Katie Grace and pedal steel player and guitarist Skip Krevens joined the session. Skip has performed and recorded for Broadway productions and for songwriters such as Laura Cantrell. "Sorry, Stella" was released in late 2012.