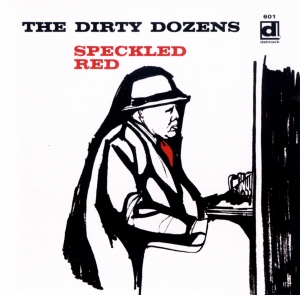 Speckled Red (Rufus Perryman) was a member of the first generation of blues pianists to record. His rugged blues and boogies have all the robust quality the good time blues should have. He played in taverns and whorehouses where life was lived at a fevered pitch and, tho there’s the occasional trace of sentimentality…

However, be warned: the tracks The Dirtier the Dozens and The Dirtiest Dozens contain lyrics which, while common in the brothels where they originated, are not for air play or children, and explicit language abounds on these two tracks. But if you’re looking for a memorable blues listening experience, this is it!


All Music Bio
Pianist Speckled Red (born Rufus Perryman) was born in Monroe, Louisiana, but he made his reputation as part of the St. Louis and Memphis blues scenes of the '20s and '30s. Red was equally proficient in early jazz and boogie-woogie -- his style was similar to Roosevelt Sykes and Little Brother Montgomery. Although born in Louisiana, Speckled Red was raised in Hampton, Georgia, where he learned how to play his church's organ. In his early teens, his family -- including his brother Willie Perryman, better known as Piano Red -- moved to Atlanta, Georgia. Throughout his childhood and adolescence he played piano and organ, and by the time he was a teenager he was playing house parties and juke joints.

In the mid-'20s Red moved to Detroit, where he played various nightclubs and parties. After a few years in Detroit he moved back south to Memphis. In 1929 he cut his first recording sessions. One song from these sessions, "The Dirty Dozens," was released on Brunswick and became a hit in late 1929. He recorded a sequel, "The Dirty Dozens, No. 2," the following year, but it failed to become a hit. After Red's second set of sessions failed to sell, the pianist spent the next few years without a contract -- he simply played local Memphis clubs. In 1938 he cut a few sides for Bluebird, but they were largely ignored.

In the early '40s Speckled Red moved to St. Louis, where he played local clubs and bars for the next decade and a half. In 1954 he was rediscovered by a number of blues aficionados and record label owners. By 1956 he had recorded several songs for the Tone record label and began a tour of America and Europe. In 1960 he made some recordings for Folkways. By this time, Red's increasing age was causing him to cut back the number of concerts he gave. For the rest of the '60s he only performed occasionally. Speckled Red died in 1973.
5
What's This
Advertisement