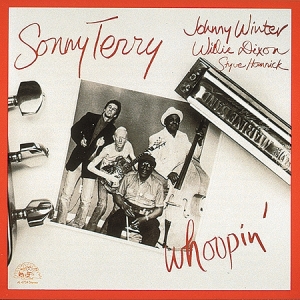 Sonny Terry was a giant of the blues--one of the best known and most influential of all blues harmonica players. His signature shrill, 'whooping' style of acoustic folk blues harp was imitated by hundreds of players. In a career that spanned 50 years and took him from Carolina street corners to concert stages worldwide, Terry defined a style of harmonica that is still a cornerstone of the blues tradition. With his longtime partner, guitarist Brownie McGhee, Terry was a key figure in integrating blues into the folk music scene in the 1940s and 1950s. Terry and McGhee were among the first bluesmen to reach a national and international audience, many of whom had never heard the blues before.

Sonny Terry was born Saunders Terrell on October 24, 1911 in Greensboro, NC. By the age of 16, Terry lost his sight in two separate accidents. His father taught him to play harmonica, and Sonny -- because his blindness wouldn't allow him to pursue a career in farming -- decided to become a blues singer and professional harmonica player. He traveled to Raleigh and Durham to play on street corners for tips, and in 1934 he met popular blues guitarist and singer Blind Boy Fuller. Fuller convinced him to relocate to Durham, where the two bluesmen would perform together. The pair became a popular local attraction and they were brought to New York in 1937 to record for the Vocalion label. The following year Terry was invited to perform in John Hammond's legendary Spirituals to Swing concert in New York.

Upon his return to Durham, Terry continued to perform with Fuller but also met his future partner, Brownie McGhee. Terry and McGhee performed together, but it wasn't until the death of Fuller in 1941 and the pair's subsequent move to New York a year later that the partnership became permanent. Work in New York was plentiful, and the two performed separately and together. They befriended folk legends such as Leadbelly, Woody Guthrie and Pete Seeger, and later Terry would appear with them on record and in concert. In 1946, Terry became part of the Broadway cast of the long running production Finian's Rainbow. He returned to Broadway in the mid 1950s (this time with McGhee in tow) to join the cast of Cat On A Hot Tin Roof. Around this time, Terry and McGhee began touring extensively outside New York. They also made numerous recordings for labels such as Folkways, Savoy, Fantasy and Old Town, and recorded as accompanists as well. Because of the duo's extensive touring and recording, they became famous in both folk and blues circles.

During the early '60s, the duo performed at major folk and blues festivals around the world. Terry also found time to work with Harry Belafonte and do Alka-Seltzer TV commercials. In the '70s, Terry's schedule kept him constantly on the road, traveling to places as far away as Europe, Australia and New Zealand, but he managed to find time to write the instructional book, The Harp Styles of Sonny Terry in 1975. Around this time, the strains of the road and other personal problems took their toll on Terry and McGhee's relationship, and the duo split up.

Famed guitarist Johnny Winter helped expose a younger blues audience to Terry by producing Whoopin', a supersession featuring Terry along with Winter and Willie Dixon. The album, originally released on Winter's own Mad Albino label, was rereleased on Alligator in 1984. However, by this time Terry was slowing down and only accepted sporadic live dates.

He passed away on March 12, 1986, the same year he was inducted into the Blues Foundation's Hall of Fame.
18
What's This
Advertisement