Sideline - When the Son Rose Up That Morning [Single] 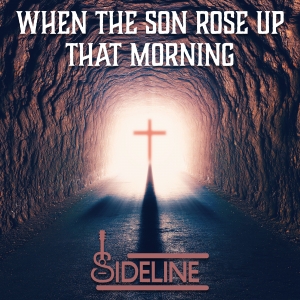 The bluegrass gospel tradition is as old as the music itself, and if you needed a reminder, the solemn Appalachian ring of the banjo on the latest single from Mountain Home Music Company’s award-winning Sideline furnishes one from the very first note. “When The Son Rose Up That Morning,” from the pen of acclaimed songwriters Rick Lang and Josh Shilling, brings the same devotion to the gospel message and the bluegrass song that earned their previous sacred release, “I’ll Live Again” a place in Bluegrass Today’s top 30 bluegrass gospel songs of 2020.

“When we got ‘When The Son Rose Up That Morning’ from Josh,” says bassist Jason Moore, “It hit a nerve with each of us due to either the groove, message or words, depending on each individual. The main thing we knew was, we wanted to do the song.”

While the song’s stark melody made spare, open-interval duet harmony between lead singer Jacob Greer (guitar) and tenor vocalist Zack Arnold (mandolin) a natural choice, and the all-in a capella closing (featuring all six members, including fiddler Jamie Harper) a deftly creative one, the instrumental arrangement turned out to be a little more challenging. “When we listened to the demo for this song,” notes guitarist Skip Cherryholmes, “one of the first things [banjo player] Steve [Dilling] said was, ‘This is begging for some bluesy slide guitar.’ I had never really messed with a slide too much, but this gave me a reason to sit down and take it seriously, and it added a lot of depth and intensity to the song. I’m a sucker for rhythm, so the real challenge was learning how to maintain my rhythmic foundation while playing foreign chords on a foreign instrument.”

“The vocal piece at the end was also something different and fun that seemed to fit the soul of the song so well,” he adds. “It’s awesome to be in a group where all 6 members can not only sing, but understand and confidently execute harmonies.”

Releasing just in advance of Easter, “When The Sun Rose Up That Morning” offers a timely, inspired recounting of the Resurrection that’s sure to find immediate favor with bluegrass programmers and fans alike.

About Sideline
Sideline is a pedigreed six-piece powerhouse whose style has set the pace in Bluegrass for over two decades. Founders Steve Dilling, Skip Cherryholmes and Jason Moore can all claim their own historical significance to the genre as members of highly awarded groups, multiple Grand Ole Opry appearances and years of national and international touring. What started as a side project for the seasoned players soon moved to the front and center and they began to record and release albums in earnest. In 2019 Sideline won the IBMA Song Of The Year Award for their hit single, "Thunder Dan."

To listen to Sideline reminds the fan of why so many people fall in love with Bluegrass in the first place; pulse-pounding drive, songs sung from the heart, perfected timing and dynamics as well as a visceral emotion in the rendering. A band that was started as an off-season fun experiment has become a full-time dream team of players and singers.

The band, recorded or live, move dynamically from well chosen, hard-hitting neo-traditional covers of classic songs to new material curated by a band with a perfect sense of who they are and what they have to say. Combine all this with their on-stage energy and finesse as well as their powerful and affecting harmonies, and you have the embodiment of the North Carolina Bluegrass sound. Sideline has released 4 national projects and records for the highly awarded Mountain Home Music Company based near Asheville, NC.