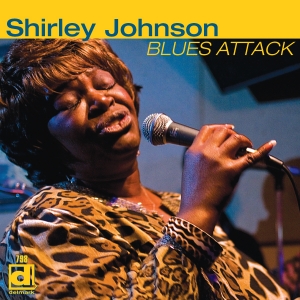 After the success of her first Delmark CD "Killer Diller (Delmark 757), Shirley Johnson is back with that same blend of traditional good-rockin' Chicago blues, smoldering R&B and poppin' soul. It’s rare these days to find a blues artist who’s been "in residence" at a club for a long period of time. Regardless, Shirley has held down a regular gig at Blue Chicago virtually every week for the last seventeen years. The opportunity to work with her own band over a long stretch of time enabled Shirley to make these songs her own and give them the feel of an actual live performance.

It’s rare these days, on the North Side of Chicago, to find a blues artist who’s been "in residence" at a club for a long period of time. Most of the newer venues that have sprung up in the wake of the city’s ‘70s-‘80s blues "revival" tend to rotate their bookings, ostensibly to prevent acts from getting stale or overly familiar. But there is at least one major exception to this rule: Shirley Johnson has held down a regular gig at Blue Chicago, a lively little bistro in the North Loop district, virtually every week for the last seventeen years.

Admirers who’ve enjoyed Shirley’s sassy, tightly-run shows at Blue Chicago and other Windy City nightspots over the years may not be aware of it, but it’s been a long journey from her roots in Norfolk, Virginia to her modern-day success as one of Chicago’s most dependable and well-loved blues ambassadors (when she's not performing at Blue Chicago she's usually overseas -- to date, by her own count, she's worked in nineteen countries). Like many blues and R&B performers, Shirley got her start in the church. In fact, she was already singing gospel when her family moved from Franklin, Virginia to Norfolk before she was eight years old.

Shirley’s family didn’t approve of secular music, but that didn’t stop her from branching out. She has cited fellow Norfolk alumna Ruth Brown as an important early role model; she also listened to and admired such artists as Etta James, Johnnie Taylor, Bobby "Blue" Bland, and B.B. King. By the time she was in her early twenties, she had made the decision to expand her own musical pallet to include secular, as well as religious material. That decision, in turn, led to her first opportunity as a recording artist. "While I was doing gospel," she remembers, "I did a little pop, rhythm – I was doing back-up for a friend of mine, Ida Sands, and we opened up for all the artists who came to town, for Al Green, we opened up for Aretha Franklin, we opened up for quite a few artists. But in the meantime, a guy named Wilson Williams – the song that he wrote and recorded on me, around ‘74, ‘75, was called ‘Have A Little Faith in Me’; after that, he did another one called ‘Too Big to Cry.’

"I was still doing gospel, too, at the time, [but] everyone was saying, ‘You got a blues voice.’ Most of my people are religious, and they don’t believe in it, but I felt like it’s not that I was getting out here, getting drunk, partying, to have a good time. I liked singing the blues, I liked the feel of it, and the people loved it. So I feel like there’s nothing wrong with it, and it tells the same stories as gospel. A friend of mine, [vocalist/entrepreneur] Little Scotty, he said, ‘You need to come to Chicago," and so on April 15, 1983, and so I did -– to sing the blues."

Any dreams of overnight blues stardom, though, were quickly squelched as Shirley struggled to insinuate herself into the competitive Chicago blues circuit. "It was kinda lonely," she admits, "and things weren’t moving really fast. But I said to myself, ‘I’m not gonna let this run me back home.’ And I didn’t – I just dealt with the punches. I have a tendency to block things out when they’re not right, and just keep on going. Buster Benton gave me my first job, a couple months after I first got here; I was with him for five years. Then I was with Johnny Christian at the Checkerboard Lounge for two and a half years."

At that juncture, in the early ‘90s, Shirley came to the attention of keyboardist Professor Eddie Lusk. On a tip from the well-known guitarist Jimmy Dawkins, Lusk came to the Checkerboard to check her out; he soon hired her for a Canadian tour, and after that he brought her up to Blue Chicago and introduced her to owner Gino Battaglia. As Lusks’s featured vocalist, Shirley made an immediate impact at Blue Chicago with her powerful delivery and flamboyant performance style. After Lusk died in 1992, she continued on at the club as a featured vocalist.

In 1994, Shirley released her first full-length CD, Looking For Love, on the Appaloosa label; in 2000 she signed with Delmark, for whom she released the widely acclaimed Killer Diller in 2002. Despite her growing success, though, she had yet to put together a band of her own; she was still fronting various aggregations at Blue Chicago and the other clubs around town where she sometimes worked. One of them was led by guitarist Johnny B. Moore, a versatile and gifted fretman who was slowed down by a stroke in 2004. At that point, Shirley took over as bandleader, although with characteristic willfulness she retooled things to fit her own idea of what her back-up group should sound like: "I gradually, you know – gettin’ rid of one that wasn’t doin’ right, and gettin’ another, until I got the band like I wanted it." Today drummer Cordell Teague is the sole remaining holdover from that first Shirley Johnson band.

It can still be a challenge to maintain a career in the uncertain and often perilous music business, but Shirley prides herself on her professionalism, her dedication, and her charitable spirit, which she says has helped her build a reputation among musicians as a fair –if necessarily strict– leader. "I treat ‘em right," she asserts. "I treat ‘em right and I respect ‘em, because I demand respect from them. One of ‘em got CDs, I put their CDs on the table with mine. Anybody wanna buy ‘em, cool. Because I understand that they got to live just like me. So I try to help them any way I can. But in the meantime, have my stuff right when I get on stage. That’s all I ask."

She brings a similar focus to her work in the recording studio. Thinking about the wide range of styles, eras, and musical sensibilities represented on this disk, Shirley emphasizes that she cares less about purists’ preconceived definitions of authenticity ("I like my blues with a little sugar in it") than she does about the emotional honesty and musical depth of the material she chooses. "It has to be the lyrics," she affirms, "and what they’re saying. It has to make sense to me. Tell a story. I’m a serious singer. Blues is, I would say, a feeling. Blues is a feeling, and I feel it all down in my soul.