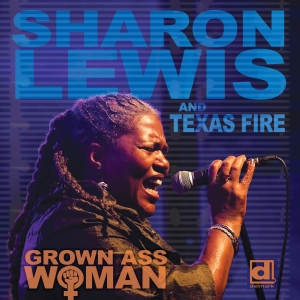 Sharon Lewis unleashes another extraordinary album; Grown **** Woman! A review of her first Delmark album said “The Real Deal qualifies as one of the best blues albums of the year” – Illinois Entertainer This new album kicks off with “Can’t Do It Like We Do” a tribute to the current Chicago Blues sound and scene. “Hell Yeah!” is a total party jam, there’s plenty of soul like “They’re Lying” and “Call Home”, and “Freedom” is a timely song which points out that “freedom cannot be freedom until freedom means freedom for everyone!” Notes by David Whiteis enclosed.

Thank you to all the talented musicians on the album, to Bruce James for his contributions during rehearsals. To a wonderfully, prolific songwriter and friend since '93, thank you to Steve Bramer for allowing me to interpret your work my way. Thank you Sugar Blue and Joanna Connor for your incredible musical contributions. Thanks to my Loctician/hair stylist Enrique Dorsey and my nail tech BiBi. Thanks to the Delmark family and finally, to all my exes...you unknowingly gave me fuel for my songs by turning me into a Grown **** Woman so thanks! - Sharon

David Whiteis is the author of Chicago Blues: Portraits and Stories, which includes full biographical portraits of Sharon Lewis and other current and former Chicago blues artists, and Southern Soul-Blues, both published by University of Illinois Press.