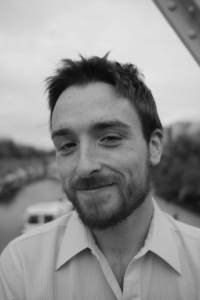 Shane has heard his father's banjo playing since birth. He spent his summers running around bluegrass festivals and dropping in on jams since before he was big enough to hold a guitar. For Shane McGeehan, life as a bluegrass musician was an inescapable fate. In the summer of 2015 he met his bandmates in Serene Green. Since then they've recorded two albums , played countless shows, and developed a fan-base all over the east coast. On this debut solo album he showcases the sound he has honed during his formative years. Comprised mostly of original songs and a few choice covers, the album demonstrates Shane's knack for honest and insightful songwriting, his technical command of the upright bass and the guitar, and his singing which is at the same time strong and full of warmth. In addition, he has put together a powerhouse band. You can hear the excitement and admiration the musicians have for one another. The band sounds relaxed and spontaneous, eagerly pushing each other to greater musical heights. It's like listening to a good jam among old friends. His respect for the first generation pioneers of bluegrass music is clearly evident, but he is certainly not bound by convention or tradition. No doubt, after listening to this album we will all look forward to whatever the future holds for Shane and his musical endeavors.
9
What's This
Advertisement