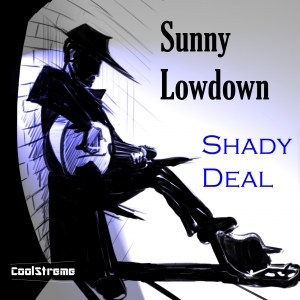 News 9/23/19 - Sunny Lowdown wins regional competition for the International Blues Challenge to be held by The Blues Foundation in Memphis in January, 2020

"The absolute best of them can make the blues fresh and engaging every time, for anyone. Sunny Lowdown does that..Drive, spirit, spookiness-all the elements are here." - Elmore Magazine

"This utter badass has a wonderful under the radar record here that's sure to fly high in the long run. A thorough original, every move this cat makes is going to grab you. Killer stuff." - Midwest Record

"Two songs in and I'm already in love with this album... This is the genius of a guy that has blues running through his veins...Get this into your collection. You won't be disappointed." - Blues Matters

"There's just so much to savor on this one - good stuff!" - KDHX St. Louis

This release follows up 2018's release "Down Loaded", which was nominated for a Blues Blast Music Award.

For a long time I heard this tune like a Pop Staples tune, a more frustrated tone than the Stones version, and hey, if you can't get no satisfaction, you're frustrated.

I wrote this on Christmas Eve. It was cold and dark, and the whole scene came to me at once. You're supposed to be having a good time with your girl, and she tells you she's in love with your best friend. In a rage you shoot her, then feeling regret and remorse, you consider turning the gun on yourself just as the police arrive. You pray "Please Santa Claus, bring my baby back to me." It's the blues.

I love Li'l Son Jackson's music. It's foreboding, with strange overtones. I changed this tune around a bit from his version to fit the mood I was in.

I lost a friend to cancer a number of years ago. She was a remarkable woman who died too young, and this Muddy Waters tune was one of her favorites. Strangely, its subject mirrors how I heard about her passing.

This is a twist on a lot of blues tunes. The guy falls for a girl he hasn't known for too long. Instead of leaving his current girl, whom he's known for a long time, he stays with her, because he feels if he leaves, then he's the kind of guy who will leave the new one too. But he does ask the new girl to secretly keep the flame going.

This is a Sunny Lowdown twist on many Lightnin' Hopkins tunes. You can't beat Lightnin'.

Currently living in Vermont, I can't help but notice the men with ponytails and man buns. So I started thinking about how I'd feel if my girl bought me a clip-on man bun.

Pee Wee Crayton's version of this is one of my favorites, so I made it Sunny's style. It fits the current political scene just as well as it did over 50 years ago. It's timeless

This tune captures the mentality of a one-night stand kind of guy.

T-Bone Walker's great staple, I turned it around a bit, but it's the same tune.

After a long recording session with the Uptown Food Syndicate, we got hungry for some chicken. People love this tune wherever I play it. It's a party tune.


LINER NOTES & BIOGRAPHY
Sunny Lowdown's first release was entitled "The Blues, Volume Low", and that remains his approach to the blues on this latest release, "Shady Deal". He takes his time, and doesn't hit you over the head. His power is in his tone and phrasing. You might call it a Clint Eastwood approach. No screaming - just a quiet "make my day" that send chills up your spine. From his swampy reworking of The Rolling Stones' "Satisfaction" to his stark "Christmas Eve Blues", to the romantic "Tried And True" and the hilarious whims of "Clip On Man Bun Blues", to the wild textures of "Chicken In A Basket" performed with The Uptown Food Syndicate, Sunny is his own man, giving you his own take on a world we all struggle with day to day. Sometimes it's a celebration. Often it's a shady deal.

Sunny Lowdown was only sixteen when he played his first professional gig backing John Lee Hooker. He has since worked with many of his favorite blues musicians: Howlin’ Wolf guitarist Hubert Sumlin, Muddy Waters pianist Pinetop Perkins, Chicago blues legends Otis Rush and George “Wild Child” Butler, Fat Possum recording artists R.L. Burnside and Cedell Davis, and others. Before acquiring the nickname "Sunny Lowdown", Sunny had achieved renown as Louie X. Erlanger, guitarist for the group Mink DeVille, during which time Mick Jagger had called him one of his favorite guitarists. His guitar playing can be heard in many feature films, including "Breathless", "Pope of Greenwich Village", "In The Land of Women", "Blue Collar" and the recent popular Showtime TV series "Billions".

Sunny's prior release, Down Loaded, was nominated for a 2018 Blues Blast Music Award and continued the tradition he began with his critically acclaimed first CD, “The Blues Volume Low”, which was selected as “Blues CD Of The Year” by Spokane Public Radio. "Down Loaded" contains 7 tracks penned by Sunny, and five traditional tracks reaching back to bluesmen like Li’l Son Jackson, J.B. Lenoir and Lightnin’ Hopkins. Sunny’s own tunes range from “Texting Blues”, about a couple who can’t sustain a conversation, to the aching longing of “A Girl I Once Knew”, to the toe tapping swing of the instrumental “That’s Enough”. Sunny's blues is soulful, heartfelt blues that takes its time and only says what needs to be said -- not a word or note more.
9
What's This
Advertisement