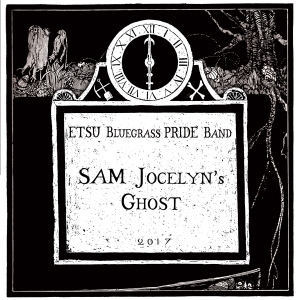 
JOHNSON CITY - Holly McIntyre and the ETSU Bluegrass Pride Band tell a creepy tale that has haunted the residents of Coastal Carolina for over 200 years.

Historic Wilmington has its fair share of ghost stories and legends of past souls, long departed. But none compares to the legend of Alex Hostler and the unfortunate demise of his dear friend Sam Jocelyn.

Known for exploring philosophies of the “great unknown,” the two men made a pact that whomever should die first would return in spirit and explain death’s reality. Too soon this was tested in March 1810, when the young Jocelyn accidently fell off his horse and into the frigid Cape Fear River, permanently establishing his new and final residence in the St. James Episcopal Church Cemetery.

But what spells the end for most mortals was just the beginning for Sam Jocelyn’s Ghost.

The ETSU Bluegrass Pride Band masterfully backs up McIntyre’s singing with true East Tennessee drive and grit. Produced by Program Director Daniel Boner, the song is yet another solid representation of precisely why ETSU is known throughout the world as the “Home of Bluegrass Music in Higher Education.”