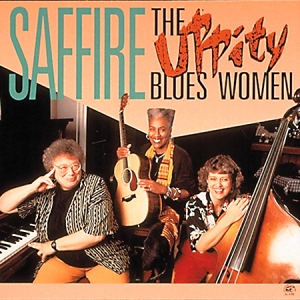 Thanks to the undeniable talents, sassy attitudes and constant touring of pianist/guitarist/vocalist Ann Rabson, guitarist/harmonicist/vocalist Gaye Adegbalola and multi-instrumentalist/vocalist Andra Faye, Saffire have continued to spread their message wide and far. Over the course of six outstanding studio albums and one foot-stomping live release, Saffire—The Uppity Blues Women have earned legions of fans of all ages and genders all across the country and around the world. Deluxe Edition captures some of the best songs and performances from these releases, featuring over 75 minutes of material selected by the band.

It’s been over 20 years since Ann Rabson joined forces with her guitar student, Gaye Adegbalola (a former award-winning 8th grade science teacher), and they set course for a full-time music career. After gigging around their hometown of Fredericksburg, Virginia and developing a substantial following, the two, along with the band’s original bassist, Earlene Lewis, pooled their money and recorded an album that they forwarded to Alligator Records president Bruce Iglauer. The original songs and the musicianship, but most of all the feisty personality that shone through, impressed Iglauer. Although he had never signed or recorded an all-acoustic act before, he couldn’t get them out of his mind. “I kept coming back to the tape over and over,” Iglauer recalls. “I just figured if I enjoyed it so much, other people would, too. But I never expected what actually happened.”

Their debut album, 1990’s Saffire—The Uppity Blues Women, became one of Alligator’s biggest selling releases ever. Gaye won a Blues Music Award for Song Of The Year for her raucous “Middle-Aged Blues Boogie.” The group quickly went from being local favorites to internationally recognized blues stars, sharing stages with Koko Taylor, B.B. King, Ray Charles and Willie Dixon, who said of the band, “They knock me out.” National media outlets like Entertainment Tonight, CNN’s Showbiz Today, and National Public Radio’s Weekend Edition ran feature stories on the band. Articles and record reviews appeared in People, DownBeat, CD Review and in dozens of major daily, weekly and monthly publications. Saffire had definitely arrived. Their follow-up albums, 1991’s Hot Flash and 1992’s Broadcasting, took Saffire to even greater heights. Constant touring and increased radio play earned the group new fans everywhere they went. “Even people who don’t like the blues can’t resist them,” declared The Washington Post. With the departure of original bassist Lewis after the release of Hot Flash, Broadcasting featured guest players Larry Gray, Tony Z, Steve Freund and multi-instrumentalist Andra Faye rounding out the sound. Andra’s mastery of all things stringed and her country-tinged vocals added a new dimension to Saffire’s music.

The band’s subsequent tour and album, 1994’s Old, New, Borrowed & Blue, brought Andra into the band full-time, and their fan base continued to swell. Features in MS. and an interview on National Public Radio’s Fresh Air spread the word all across the country. Their subsequent albums, 1996’s Cleaning House, 1998’s Live & Uppity and 2001’s Ain’t Gonna Hush! earned the band hordes of new fans and mountains of critical acclaim. Throughout all of their albums and live performances, Rabson, Adegbalola and Faye combine their voices and instruments to create a rollicking mix of soulful energy and infectious spirit.

Deluxe Edition will delight old fans and invite a host of new fans into the world of Saffire—The Uppity Blues Women. “These three middle-aged women look more like fugitives from a Tupperware party than a typical blues band,” The Chicago Tribune reported after a characteristically buoyant Saffire gig. “But appearances can be deceiving, as these musicians demonstrated by tearing up the stage with their high-powered, take-no-prisoners approach.” With Deluxe Edition, Saffire’s soulful, uplifting music will make certain their message is heard loud and clear.

Ann Rabson was born in New York and grew up in Ohio. As a child she fell in love with the blues and began studying guitar. At the age of 18, she began her career as a professional blues artist. In 1971, she moved herself and her young daughter to Fredricksburg, Virginia and took a day job as a computer analyst while continuing to perform at night. By the early 1980s, Ann was concentrating on piano, and along with her guitar student, Gaye Adegbalola, decided on a full-time music career. Shortly after, Saffire was born, and the accolades began to roll in. Ann was nominated for a 1995 Blues Music Award for “Traditional Blues–Female Artist Of The Year.” In 1997 she released her first solo album on Alligator, Music Makin’ Mama, to great critical acclaim. And to top off her year, she was honored with three 1997 Blues Music Award nominations, including “Traditional Blues - Female Artist Of The Year,” “Traditional Blues - Album Of The Year,” and “Acoustic Blues - Album Of The Year.” In 2000, Ann received another Blues Music Award nomination in the “Female Artist of the Year” category. According to DownBeat, “Rabson plays bluesy, honky-tonk piano with staggering authority.” When not touring with Saffire, Ann can often be found performing solo. In addition, she has released two more solo albums, Struttin’ My Stuff and In A Family Way.

Gaye Adegbalola was raised in a tight-knit Virginia family. She played flute while in high school and was chosen for the all-state band three years straight. She became a biochemical researcher and later an 8th grade science teacher (for which she was honored as “Virginia Teacher Of The Year” in 1982). After hours, Gaye and her father ran a theatre-arts group, mixing music, politics and theatre. Gaye first met Ann in the mid-1970s. “I followed Ann around for three years begging for guitar lessons,” recalls Gaye. “She finally agreed just to get rid of me.” As she became more accomplished on the guitar, Gaye devoted more of her time to solo performing. In 1984, Gaye and Ann formed a blues duo, and Saffire began to take form. In 1990, Gaye won a Blues Music Award for Song Of The Year for her composition, “Middle-Aged Blues Boogie” from Saffire’s self-titled debut. Her solo debut, 1999’s Bitter Sweet Blues, received unanimous praise from publications as diverse as Girlfriends and The Washington Post. In 2005 Gaye, along with pianist Roddy Barnes, released Neo Classic Blues.

Andra Faye hails from Indianapolis, where she originally pursued a career as a registered nurse. She’s been playing music since she was in the 6th grade, and has performed in a variety of eclectic bands. Andra was influenced early on by blues legends Howard Armstrong and Yank Rachell. When Ann and Gaye called on Andra to sit in on the Broadcasting sessions, she was shocked. “I was very nervous,” Andra recalls. “I kept suggesting other musicians. It was as if I found a winning lottery ticket in the street and tried to give it away.” Not only did she assist in the recording sessions, she joined the band as a full member in 1992. Her proficiency on bass, fiddle, mandolin, guitar and other instruments—not to mention her vibrant stage personality—helped Saffire become the force that they are today. “It’s still amazing that I get to do what I dreamed about,” she says. “I guess sometimes dreams do come true.” Faye released her first solo recording (along with The Mighty Good Men), Walking Home To You in 2005.