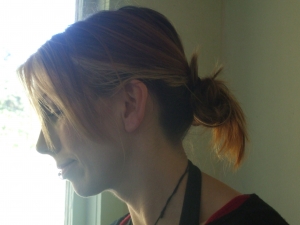 Life is exciting! It's full of trepidation, new horizons and aspirations.Of course this is not always the best means to communicate a huge rush of heart-felt emotion. In short, SL Macombee knows. She has the ability to touch the soul, to let the listener know they are not alone. Your darkest fears, your common understanding, your daily life turned inside out. Compositions to induce your thoughts and free your mind, revolve around film noir style musical so eclectic they would give a Naz Nomad nightmares.

From her formative days leaving home to join a band at the age of sixteen, Sarah's songwriting and vocal styles have since changed dramatically; nowadays she is as much at home singing about life's rich encounters to a self constructed backbeat of jazz, ska, fusion, electronica, operatica, soul or hip hop. This in conjunction with her three octave range and superb vocal control, leave the listener mesmerised, intrigued and bemused.

After a few years out of the (active) music scene Sarah was coerced into being part of a new art-rock style outfit based in Newport during 2003/2004. This band known as 'The Macombees' played a set of tunes penned by Sarah with musical arrangement duty shared with the band. The track 'Sense Offender' is available here for you to download. One of the songs she did with the band.

Sarah then, in 2006 emmigrated to New Zealand with her husband and 4 children to start a new life.

She has met up with many wonderful musicians in NZ and has played with the wonderful Caitlin Smith who has been a wonderful inspiration and support. Sarah also plays regularly at cafe '121' on Ponsonby Road in Auckland along with Paul Isaacs on the piano. A fantastic musician who compliments her songs perfectly.

Paul recently introduced Sarah to Mike. Mike is a guy who has a passion for the female voice. He specialises in recording sound for film, radio etc and after hearing a recording of Sarah singing agreed to record her the very next day. The result you can hear on here. A beautiful, honest performance of Sarah's heart rending songs accompanied by Paul.

Turn up the volume and listen very carefully, this is the new you.
0
What's This
Advertisement