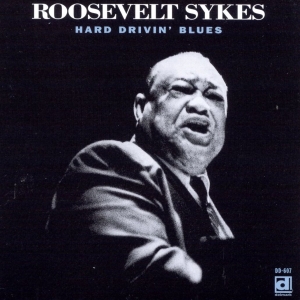 Roosevelt Sykes is one of the most important urban bluesmen of all time. That’s a strong statement, but Roosevelt Sykes is a strong singer, a powerful pianist, a magnificent personality, and a profound influence on other bluesmen of his own and several succeeding generations. One has but to listen to note traces of the Sykes style. His compositions (including Night Time Is The Right Time, a vehicle for Ray Charles, and Driving Wheel, revived by Junior Parker) are an important part of the blues repertoire. His piano was heard behind virtually every blues singer who headquartered in St. Louis during the 1930’s.

Roosevelt Sykes Bey was born in Helena, Arkansas on January 31, 1906. He worked on a cotton farm, in sawmills, in a cafeteria and as a cab-driver. Sykes is glowing in his praise of Lee Green and Leroy Carr whom he quickly equaled or surpassed. He lists his favorite pianists as Earl Hines, Count Basie and Fats Waller.

Roosevelt Sykes began making records in 1929, and kept churning out his own pungent brand of blues and boogie for many decades. When the music heard on this album was recorded in January 1962 and May 1963, Sykes was in the process of ripening into a sanguine creature even more interesting and provocative than his earlier selves had been. By the time these recordings finally appeared in 1975 as Hard Drivin' Blues on Chicago's Delmark record label, Sykes had enjoyed one hell of a comeback as an internationally acclaimed master of the blues; he toured extensively, playing tiny saloons and massive music festivals, even recording at times with electrically amplified instrumental backing. All throughout the second half of the 1970s, the one-man, one-piano Hard Drivin' Blues album was warmly received by those lucky enough to have caught Sykes live and in person, and it still stands as one of the very finest recordings in his entire discography. Highlights include the picturesquely humbled "She's Got Me Straddle a Log," the gradually paced "Slidell Blues," and its geographically linked cousin, the rowdy "North Gulfport Boogie." Three of these performances are manifestations of Sykes' perpetual preoccupation with human sexuality: the convivial "I Like What You Do (When You Do What You Did Last Night)," the rosy tribute to his woman's "Dresser Drawers," and the infamous "Kickin' Motor Scooter," destined to reappear years later as "Dirty Mother for You." There are plenty of Roosevelt Sykes albums to choose from; this one is essential, fundamental, and indispensable.
12
What's This
Advertisement